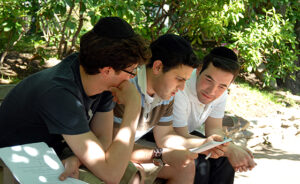 I met James* roughly two years ago. A religious Jewish student, James was deeply involved in the community and a staple at any sort of learning event. But his deep knowledge of Judaism and commitment to the community belied a tightly concealed fact about his identity. James, raised Jewish, had his life upended after becoming more religious and subsequently discovering that having a non-Jewish mother meant he wasn’t halachically Jewish. A year prior James had gone through an official Orthodox conversion to, as he named it, “re-confirm the identity I already knew I had.”

One of the major stories of 21st century campus Jewish life is the proliferation of students from non-traditional Jewish backgrounds who become connected to the community. This wonderful phenomenon speaks to both the warmth and draw of the community while simultaneously highlighting a challenge and critical need for more knowledge and understanding surrounding these fundamental issues.

James’s story is an anomaly. Orthodox conversion, with its rigorous demands and foundational dogmas, is not a solution that can help (or is even appropriate to suggest) for most. Rather, we need to fully embrace a more nuanced view of Jewish identity—attesting to the unique position of the modern Jewish community. Luckily, like many contemporary questions we face, there is a long Jewish tradition of discussion and debate to ground our thinking.

One of the major debates of the late biblical period centers around this exact question of Jewishness. Whether or not one explicitly realizes it, the Torah is full of non-traditional relationships. From the sheer ubiquity of polygamy, prostitution and intermarriage throughout its pages, one could argue that the Torah actually has zero relationships that would fit into today’s traditional mold (between two Jewish partners). Of course, later rabbinic traditions would attempt to smooth over this bumpy and inconvenient history, but it’s hard to read the marriages of Moses, David and Solomon as anything but Jews marrying non-Jews. And guess what – their children were all Jewish!

In the 5th century BCE, as the nascent Persian hegemony allowed Jewish to return from their exile in Babylon – a Jewish communal leader named Ezra would run the largest campaign against intermarriage in Jewish history. Attempting to rededicate the people to the Torah, Ezra demanded that non-Jewish spouses be cast away to protect the “Jewish seed.”

But Ezra’s view of Jewishness went against the previous tradition and was immediately challenged. The majority of biblical scholars posit that the book of Ruth, about a non-Jewish Moabite woman marrying a Jew, was actually written as an anti-Ezra polemic. Again, later rabbinic traditions would attempt to reconcile these two disparate opinions and even try to anachronistically argue that Ruth converted (a later institution), but we see that this question and debate was alive and well 2,500 years ago.

In the early rabbinic period matrilineal descent won out and became the accepted view across the board, but we need to be clear about why. As Judaism lost its political autonomy, centralization and the land of Israel – its identity began to change from the national ethno-religion of biblical times into simply a religion. Viewing Jewishness as following only matrilineal descent is a religious view, a reasonable one, but one that runs counter to the other parts of a multifaceted definition of Jewishness.

Fast forward 2,000 years and things have changed. We started to be persecuted for our ethnic (or more nefariously racial) Jewish identity resuscitating the ethnic or even tribal parts of Jewishness. Can you imagine telling a Holocaust survivor they aren’t Jewish because they only had a Jewish father?

We have regained political autonomy in the land of Israel – reigniting the nationalist face of Jewish identity. Can you imagine telling someone who identifies as Jewish, makes aliyah (the Israeli right of return does, in fact, have a definition of Jewishness that accounts for ethnicity), and fights in the IDF that they had a “bad” conversion and are therefore not Jewish? Even a plurality of today’s Jews define Judaism as something other than simply a “religion” – a definition that truly runs counter to our history and people hood.

I’ve met Jewish students with non-Jewish mothers who have been told for the first time in their life, at the age of 19, that they aren’t “really” Jewish. I have met students who converted under the umbrella of non-Orthodox institutions only to be shocked to discover that their conversion isn’t unanimously accepted across the denominations. I’ve met students who were adopted and raised Jewish only to be rejected from Birthright since their biological parents (whom they had never met) were non-Jewish. And I’ve met students who are discreetly in the process of converting, only to be casually told in synagogue or at a Shabbat dinner, “You don’t look Jewish!”

We need to do better as a community. There are multiple definitions and facets of Jewish identity, and your religious one may not fit someone else’s ethnic Jewish identity. As no less of a Jewish authority than Maimonadies states: Apropos of nothing we assume that someone in the Jewish community is Jewish. It is only, Maimonadies writes, if a person becomes overly accusatory of other people’s Jewishness, that we begin to suspect the Jewishness of the accuser. While the application of this legal principle is much more limited in scope, we must internalize its spirit for the sake of our community.

DANIEL LEVINE is the Senior Jewish Educator for Hillel and is a contributing writer to Jlife Magazine.