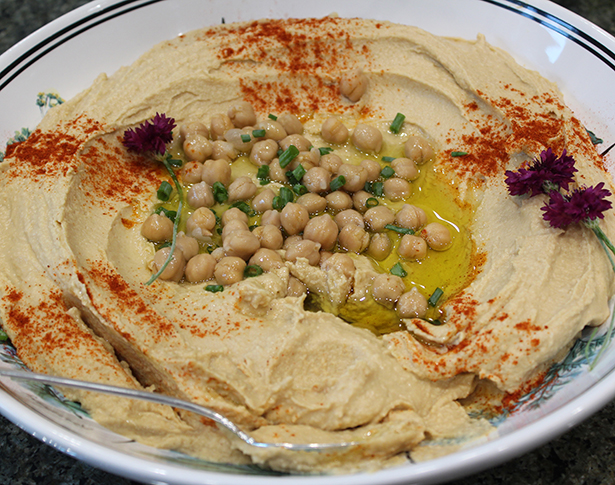 AS A YOUNG bride living in Israel, Faye Levy, lead cooking columnist for “The Jerusalem Post” and author of over twenty cookbooks, had little cooking experience. Although she had watched her mother bake (“mainly so I could lick the bowl”), she had never paid much attention.

Enter her husband, Yakir. “When I met my future mother-in-law, she said I couldn’t marry her son because he’d go hungry,” Levy told me. “Here was a woman who could make pita from the age of six. I had to learn fast.”

And where better to learn than in Israel, home to so many cultures.       “When I met Yakir, I was so excited when I realized that there was so much more to Jewish food and cooking in general than I had experienced.”

While the majority of Jews living in the U.S. are Ashkenazic, more than half those in Israel identify as Sephardic (originally from Spain, but including Morocco, Greece, Turkey and others) or Mizrahi (from other communities of the east, like Yemen, Iraq and India.)

“Israel is not just a melting pot,” said Levy, “it’s a melting pressure cooker. It’s a small, crowded country, and people from widely diverse cultures are always cooking for a holiday and sharing ideas.”

This mix of cultures has created a sort of Israeli “Jewish fusion” cooking that is constantly evolving. “But it’s not like fusion cooking here where a chef says, ‘Now, how can I be creative? Let’s put ginger in a French cream sauce,’” Levy noted. “In Israel it’s completely natural. Friends and relatives from different cultures eat at each other’s homes and say, ‘That tastes good. What did you put in it?’”

Take the matzo ball, the beloved soup dumpling of Levy’s Polish ancestors. Her mother, Pauline Kahn-Luria, who lived in Israel for 35 years before her death in 2005, used to add the cumin and cilantro of her Sephardic neighbors.

I had the pleasure of meeting Kahn-Luria years ago when she happened to be in California visiting her daughter and accompanied her for my interview about Levy’s then-latest cookbook, the encyclopedic “1,000 Jewish Recipes” (IDG Books, $35). It was easy to understand where Levy gets her energy and enthusiasm. Luria was living in a fourth floor walk-up (“it’s 56 steps, but I enjoy it!,” she said) loved to dance, and trekked each day up a steep hill to downtown Jerusalem to shop or enjoy the sights and smells of Machaneh-Yehudah, the city’s colorful open market.

“Whenever we’re together, whether I’m visiting her in Israel or she is here, we cook, either the traditional Polish favorites I remember from childhood or the Mediterranean dishes we’ve both learned along the way,” said Levy.

One thing for sure, no matter the occasion, there is always Israeli salad, the national salad of Israel, which Levy says she serves with practically every meal. “1,000 Jewish Recipes” contains six variations, the traditional consisting of equal proportions of chopped tomato and cucumber with some chopped onion, lemon juice and oil. “My mother-in-law used to add red or green cabbage,” Levy remembered. “Since living in California I add jicama and sometimes bok choy or napa cabbage. When we first moved here my husband thought salsa was spicy Israeli salad!”

On the table, as in the streets of Israel, East meets West, and dinner at the Levy home often includes dishes from both traditions. Case in point: chicken soup. “Yakir mentioned that his parents, who were born in Yemen, would have loved it, because we added their favorite soup flavorings—garlic, onion, cumin, black pepper and turmeric—except that we used fresh turmeric root instead of powder. Our soup also included mild Hatch chiles in two forms, diced fresh ones and red Hatch chile powder, and lots of vegetables – butternut squash, fennel, zucchini, a little daikon, chopped ginger and a few celery root leaves, with Italian parsley for garnish. We served it with Basmati rice.”

If Israel has a national dip, it would surely be hummus. “Homemade hummus is much more delicious and fresh tasting then store-bought,” Faye writes in ‘Feast From the Mideast’ (Harper Collins, $32.95). “The best hummus we’ve had, made by Israeli Arabs in Akko, near Haifa, was made with coarsely chopped chickpeas and served still warm.

“A drizzle of olive oil, a little parsley, and a sprinkling of finely ground red pepper are the usual garnishes, plus a few cooked chickpeas or sometimes toasted pine nuts or sautéed ground beef or lamb.”

“Israeli food is not just a mixture of a little Middle Eastern and maybe some American or Italian,” said Janna Gur, founder and editor of “Al Hashulchan” (“On the Table”), a leading Israeli food and wine magazine, in a recent interview. “There is a unique style that has started to evolve. Our dishes are composed of fresh, bold flavors and flavor combinations that speak Hebrew: lots of vegetables, lots of spices that are not necessarily hot, olive oil, burned eggplant, grilled meat—chicken and lamb rather than beef—whole grilled fish.”

Gur’s Moroccan-Style Hot Fish, a casserole-style dish bursting with hot peppers and garlic, comes from Chef Guy Peretz of Gazpacho in Ashkelon. “No holiday dinner in a Jewish Moroccan household is complete without it,” Gur said.

¼ cup tahini (sesame paste), stirred to blend before being measured

Aleppo pepper, paprika, or cayenne pepper (for sprinkling), to taste

1  Pick over chickpeas, discarding any pebbles and broken or discolored peas. Rinse well. If you like, soak chickpeas 8 hours or overnight in water to cover generously; this cuts their cooking time slightly and helps improve texture if peas are old. Drain soaked chickpeas and rinse.

3  Chop chickpeas in food processor. Add garlic, tahini, lemon juice, cumin, and ¼ cup chickpea cooking liquid (or water, if using canned ones) and purée until blended. Transfer to bowl. Gradually stir in more chickpea cooking liquid or water until purée is consistency of smooth spread. Season with salt to taste. Refrigerate in covered container until ready to serve.

4  To serve, spoon hummus onto serving plate and spread so edges are thicker than center. Drizzle center with olive oil, and sprinkle very lightly with Aleppo Pepper. Put a few parsley sprigs on edges of hummus.

Source: “Feast From the Mideast” by Faye Levy

1 Line a wide saucepan with peppers and herbs.

2 Mix ingredients of seasoning mix. Dip fish chunks in the mix and arrange in saucepan. Mix remaining seasoning mix with garlic and 3-4 cups water and pour over fish.

3 Cook 10-15 minutes (depending on size of fish chunks) over high heat, lower heat, cover and continue cooking another 15 minutes until sauce thickens.

Source: “The Book of New Israeli Food” (Schocken Books, $35) by Janna Gur
Jlife Food Editor Judy Bart Kancigor is the author of “Cooking Jewish” (Workman) and “The Perfect Passover Cookbook” (an e-book short from Workman), a columnist and feature writer for the Orange County Register and other publications and can be found on the web at www.cookingjewish.com.