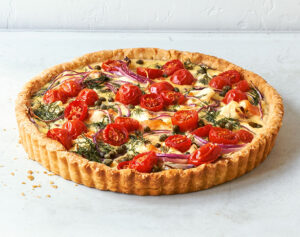 When we moved to Orange County in 1972, I was thrilled to find a bagel shop a mere two-minute drive away. Our Sunday habit, forged in New York, of relaxing with the Sunday papers over bagels and lox would continue. The first Sunday I went out to get bagels, and – you guessed it – the store was closed on Sundays. “Where have we moved?” I thought.

Food plays such a significant role in our Jewish culture that it’s hard to think of our holidays, customs and traditions without it. And yet the vast majority of what we think of as Jewish food was borrowed from others. The word “bagel” derives from the German word “beigen” meaning to bend, and “our” bagel actually descends from the German pretzel. Even the ancient Romans ate a boiled and baked roll with a hole. Bagels became commonplace in Poland and the Baltic states by the 17th century, and beginning in the 1880s waves of Eastern European immigrants brought the bagel to America. Until the 50s they were baked in little cellar operations in New York’s Lower East Side, and I remember well, growing up, the Saturday night ritual of stopping for fresh bagels, hot out of the oven, at a bagel factory above the elevated train in Arverne, Long Island, after the movies.

New York’s Lower East Side is still “bagel central” – with all its toppings, schmears and accompaniments – for legions of New Yorkers and tourists heading to Russ & Daughters, where legendary cookbook author Dorie Greenspan was inspired to create her Lower East Side Brunch Tart.

“Think bagels and lox, the Sunday morning meal of millions of New Yorkers, Jewish or not,” writes Greenspan in her new cookbook “Everyday Dorie” (Rux Martin, $35). “But to say ‘bagels and lox’ is to shortchange the dish. What you want with your bagel and smoked salmon – lox is one kind – is ‘the works’: cream cheese, red onions, capers, dill and tomato. And that’s what you get in this tart.”

I met up with Greenspan recently at Melissa’s Produce in Vernon where she introduced her cookbook and demonstrated a few of the recipes we tasted at a buffet luncheon from the book.

“This book is different from all the others,” she noted. “It’s the food I really love. This is my Connecticut book. Where I live it’s a one-hour round-trip for a quart of milk. It’s basic and practical, cooking from my refrigerator door and my pantry. These truly everyday recipes are based on what I can get at my local Stop & Shop.”

Best known for her baking cookbooks, Greenspan has only one rule: “You must have dessert.” Not surprisingly, there’s no shortage in this book! Blueberry Buttermilk Bundt Cake, Apple Custard Crisp, Chewy Chocolate Chip Cookies, Tangerine-Topped Cheesecake, Caramel Pear and Five-Spice Upside-Down Cake, to name a few– all doable, clearly explained and unintimidating. “The only fancy cake in the book is the Triple Layer Parsnip and Cranberry Cake,” she said. Yes, you heard that right: parsnips, “a vegetable that may not spring to mind immediately when you’re thinking cake. I’m sure this is how people felt when carrot cakes were new. I love when a recipe has a surprise.”

When someone told her, “You cook so healthfully,” Greenspan herself was surprised. “I hadn’t thought about it. I cook for deliciousness. I’m not a fussy cook. I think the food is beautiful on its own. I’m going for the taste.”

Stuffed cabbage, that ubiquitous (and labor intensive!) beloved dish among Ashkenazi Jews, also has an international ancestry, including Turkish, Persian, Ukrainian, Polish, Russian and Hungarian roots, to name a few.

Greenspan’s recipe comes from her mother-in-law. “She was a really good cook,” she recalled. “She would always give you every ingredient in the recipe, but when I made it, it was dry. Then I discovered her secret ingredient: ketchup, idiosyncratic but one I’d argue for.

You can prebake the crust up to 2 months ahead and keep it, wrapped airtight, in the freezer.

One 9- to 9 1/2-inch tart shell made with Pâte Brisée, partially baked and cooled

You can refrigerate dough up to 3 days or freeze it up to 2 months. While you can freeze the fully baked crust, wrapped airtight, for up to 2 months, I prefer to freeze it unbaked in the pan, wrapped tightly in aluminum foil, with the foil pressed against the crust to create as tight a seal as possible. Bake it directly from the freezer – it will have a fresher flavor. Just add about 5 minutes to the baking time.

1/2 cup basmati or other long-grain rice

JLIFE FOOD EDITOR JUDY BART KANCIGOR is the author of “Cooking Jewish” (Workman) and “The Perfect Passover Cookbook” (an e-book short from Workman), a columnist and feature writer for the Orange County Register and other publications and can be found on the web at www.cookingjewish.com.