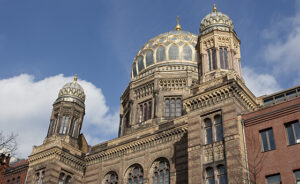 Though we are staying around home this summer, I thought I’d still share some possibilities for Jewish European travel so that when travel restrictions are eased, you might consider visiting these places and imbibing the Jewish soul that is presented in each of them. These spots present a wonderful snapshot into the Jewish European experience of the last several centuries. Some of these you can visit virtually online.
The first is the Jewish section of the old city of Prague in the Czech Republic. On the banks of the Moldau/ Vltava River in the Czech Republic, you can find one of the oldest extant Jewish towns in all of Europe. It is adjacent to the City’s old town square and several synagogues are there including some which were private family synagogues for which entrance was by invitation only. Many of them have been turned into museums to showcase the Czech Jewish communities. One of the oldest synagogues in the world is there, known as the Altneushul, or Old New Synagogue. It has been in existence at least since the 1100’s and many think the foundations may have been laid even earlier than that. This synagogue is famous for the Golem story, in which a mythical monster was created and supposedly lived in the synagogue’s attic of the synagogue. The Jewish shops and kosher restaurants of this town make this a quaint must stop on any Jewish European trip.
The Jewish communities in Italy, especially Rome, Florence, and Venice also show us a wonderful snapshot of the Italian rite that is unique to this country. The synagogue in Rome keeps the traditions of the this very ancient rite known as Nusah Roma. You can also find the wonderful Roman Jewish delicacy there—fried artichoke. The synagogue in Florence is a beautiful example of Tuscan Jewry and the famous Venetian Ghetto is a place all Jews should see, since that is where the term, ghetto, was instituted with the creation of this small island where Jews were placed in the Middle Ages to contain them. Today, the ghetto houses five synagogues, two of which are in use today. And, various shops in the ghetto offer Jewish Venetian glass, illuminated manuscripts, and kosher food. There is one stop on the Jewish Italy tour that is off the beaten track, but well worth the time to visit. It is the Baroque frescoed synagogue in the small town of Casale Monferrato in the northern part of the country. This town and its Jewish community were one of the wealthiest in the Baroque age, and it created this very lavish frescoed synagogue where very high-level musical and dramatic liturgical performances were created especially for Hoshanah Rabbah, a favorite holiday in the Italian rite.
I highly recommend a visit to the Jewish sections of Berlin, Germany where there are wonderful synagogues to see including the remnants of the Oranienburgerstrasse Synagogue where the famous Jewish composer Louis Lewandowski transformed the Jewish music of his day. Pestallozzistrasse and Rykerstrasse both have synagogues that are wonderful in which to enjoy services. Pestallozzistrasse uses organ and choir in the Lewandowski vein with the choir and organ in a loft above the ark and separate seating for men and women in the German Einheizgemenide (unified community) style. There is also a magnificent Jewish museum in Berlin as well that highlights the past and present German/Jewish experience.
Finally, I want to recommend both visiting the Portuguese Sephardic Synagogue in Amsterdam, Netherlands where you can see the largest extant Sephardic synagogue in existence and the Dohanyi Street synagogue in Budapest, Hungary, which has the largest Ashkenazi synagogue left extant in Europe. These would round out any fabulous Jewish experience in Europe.
May we all stay safe at home this summer!

Hazzan Lance H Tapper is the Spiritual Leader of Beth Shalom of Whitter and a contributing writer to Jlife magazine.

Roll With The Punches