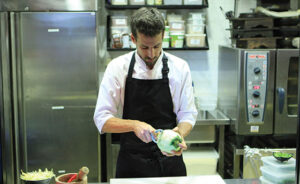 Few cities around the globe can claim such great multiculturalism as Israel’s capital, Jerusalem. Obvious to any passerby who walks the city center’s streets, Jerusalem’s people are as varied as the city’s specialty dish, meorav Yerushalmi (Jerusalem mixed grill). Just like the eclectic mix of meats in this delectable dish, Jerusalem residents are diverse. They come from all around the world, varying in tradition and Jewish heritage. But just like the meat in Jerusalem mixed grill, there is no doubt that when individuals come together, cohabitating in Jerusalem as if sautéed in an assortment of onion, garlic, and fresh spices, something beautiful is created—something much more than the sum of its parts.

It is no coincidence that Jerusalem’s multiculturalism can best be explained by food. Food exists at the very epicenter of the human experience, and is thereby a powerful vehicle of history, religion and culture. Perhaps its ability to ignite dialogue and reflection about identity is what makes food festivals the ultimate cultural affair.

Recently, Jerusalem’s powerful multiculturalism shined in the renowned urban culinary festival, Open Restaurants. Although this was just the first time that the festival came to Israel’s capital, Jerusalem was the perfect backdrop for workshops, events, and discussions about food.

At the Tachana Rishona’s Station 9 restaurant, chef Ron Fintsi revealed to guests the secrets of pan-Asian flavors, colors, and combinations. As he demonstrated the making of dishes such as raw papaya seaweed salad and asado sticky buns, Fintsi told of his year in Thailand, learning about the ingredients and methods he uses until today. Another workshop, run by Chef Ophir Dadon, brought guests to the city center’s Sushi Rehavia for a sake workshop and meal. He reminded guests that “a drink from someone else’s cup represents friendship,” something certainly not lacking as guests sipped fine sake and chowed down on sushi, dim sum, and egg rolls. With a growing Far Eastern foreign worker population in Israel, authentic Asian cuisine has yet to catch on in Jerusalem, but it is not rare to see more Asian-inspired cuisines pop up one by one.

Perhaps at the forefront of the Open Restaurants week were workshops related to Israel’s Mizrachi (Eastern) cuisines. With a large population of Jews from Arab and Middle Eastern countries, Jerusalem cuisine is largely associated with dishes like kubbeh, shakshouka, hummus, tehina, couscous, hamin, and stuffed grape leaves. Moroccan writer Shoshana Karbasi invited guests into her 350-year-old house for a meeting—eating variations of couscous over stories of love, poetry and heritage. Cook and story teller Dalia Harfoof greeted guests at her masonry house with Kurdish music and stories from her childhood. In true Israeli hospitality fashion, the guests were invited to roll their own kubbeh and mingle with coffee and cake.

In a fusion of art, culture, and food, Persian night was held at HaMifal, The Factory, a venue that hosts over 100 art displays as a part of the Empty House Project. Persian Chef Rottem Lieberson told about the importance of food in the Persian culture as guests ate vegan Persian cuisine—Persian rice, stew, and delicious, dense dumplings made of garbanzo flour. Lieberson explained that her style of cooking is healthy, family oriented, and comforting. “The heart of the Persian family is the food,” she said. “For every problem, there is a solution with food. And for every occasion, there is a unique food for that occasion.” The occasion at HaMifal was festive, with Persian music and concerts following the meal.

If Israel were a papaya salad, or perhaps a Persian stew, the cultures that make up the ingredients would be plentiful. Such was the message portrayed and celebrated at Jerusalem’s Open Restaurants series. If all goes well, perhaps there will be leftovers for another Jerusalem festival next year.

Eliana Rudee is a fellow with the Haym Salomon Center and the author of the “Aliyah Annotated” and “Israel Girl” column for JNS.org. She is a graduate of Scripps College, where she studied international relations and Jewish studies. Her bylines have been featured in USA Today, Forbes and The Hill. Follow her column on JNS.org.