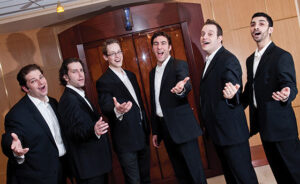 What’s better than one beautiful Jewish voice ringing out? Six! And in perfect harmony we might add. Well that is what you get when you see Six13. They are an award-winning jewish a cappella group from New York. They’re driven by a mission to connect Jews around the globe with their heritage through music, anchored by a strong Jewish identity, and fueled by thumping beatbox, intricate arrangements and soulful harmonies. Six13 is a six-man vocal band that brings an unprecedented style of Jewish music to the stage, with songs ranging from hip-hop dance tracks to rock anthems. The members sound like a full band—while using nothing but their voices. Six13 is a national phenomenon both on the internet (with over 7 million views on YouTube) and in traditional media, with numerous appearances in national television and press, and with their music songs from their six award-winning album played on mainstream radio across the globe. They have been featured on Fox, ABC, CBS, in the Huffington Post, Jewish Week and Time Magazine, and have performed at the White House for President Barack Obama and First Lady Michelle Obama.

Jlife caught up with member Mike Boxer to get the lowdown on all its recent rumblings.

What is the hardest part and best part of performing as a group? Hardest part is all the non-musical stuff—planning, logistics, travel plans, scheduling, all that stuff—only because it’s not what we love doing (making music). The best part is getting to share what you love with people who love what you make.

Maintaining “harmonious” relationships in a group can take work, are there any lessons that you’ve carried over into your every day life? We’re incredibly fortunate in that the membership of our group comes from strikingly different walks of life, both personally and Jewishly speaking. And yet every one of us despite very closely held convictions and experiences is a huge believer in respect and tolerance for other views, and practices what they preach. I know from personal experience how rare that is and I count my blessings—I don’t know of any other professional performing group made up of multi-denominational Jews, and I think there’s a reason for that. I wish it was something we could see in the global Jewish community at large. It teaches us that while there are so many different values, the one that’s most important is openness and acceptance.

What is your favorite part about the Jewish tradition of singing? We’re very fortunate that there is a niche for a cappella singing built right into Jewish religious observance. Not only does it create a greater demand for what we do, but it allows us to fill a need uniquely like no other form of music can. Shabbat, yomtov, sefirat haomer, we’ve got you covered.

What is your favorite memory you’ve shared together so far? We’ve been lots of places and done lots of things, but nothing is every going to top standing five feet away from Barack and Michelle Obama and watching them groove to our performance of “A Hamilton Chanukah.”

Call (888) BOOK-613 or e-mail six13@six13.com for more information and to find out how Six13 can make your concert, celebration or event unforgettable.

Each year, Six13 visits dozens of Jewish communities, providing entertainment appropriate for Shabbat or any other day of the week at congregations, religious schools, JCCs, fundraising events, B’nai Mitzvah and private affairs alike. And now they are coming to your neck of the woods! Be sure not to miss their upcoming performance, the Shabbat Shirah Concert, on February 11, 2017 at the Pasadena Jewish Temple and Center in Pasadena, CA.