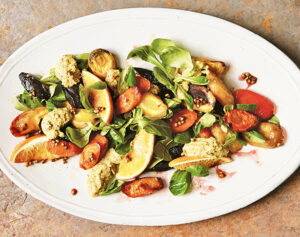 When I was growing up, Aunt Sally was in charge of the Rosh Hashana taiglach – little balls of dough boiled in honey syrup and allowed to dry, then assembled into a grand tower. No matter how slowly she cooked them, the little balls were hard as rocks, and, in retrospect, I’m sure the neighborhood dentists appreciated this tradition.
Honey is the quintessential Rosh Hashanah food, but you don’t see taiglach very much anymore. While Sephardim make honey-soaked cakes such as tishpishti for the holiday, Ashkenazim more commonly serve honey cake (lekach), which, alas, is often quite dry and too strongly flavored, and like its cousin, the Christmas fruitcake, loiters on the holiday table as a mere prop. Enter Marcy Goldman, editor of the wildly popular website betterbaking.com and author of “A Treasury of Jewish Holiday Baking” (River Heart Press, $45) which was chosen by epicurious.com as one of the seven best Jewish cookbooks.
“I like a New Year’s honey cake to be extra moist and sweet, as good on the day of baking as it is days later,” writes Goldman in her latest cookbook, “The Newish Jewish Cookbook” (River Heart Press, $26.99). “This one is queen of the realm—rich, nicely spiced, in a word, majestic in taste and stature. I went through many variations and tasting sessions until I was satisfied with this definitive cake. Like most honey cakes, it is a good keeper and can be made a couple of days ahead.”
For this holiday, sweetness is the order of the day. As we dip apples in honey, we wish each other a sweet New Year. We also use honey to dip with the first piece of challah, which for the New Year is usually studded with raisins or other sweet, dried fruit and baked as a round loaf to symbolize the cycle of life.
“According to the Talmud, ‘Honey and sweet food enlighten the eyes of man,’” notes rabbi and food historian Gil Marks in the “Encyclopedia of Jewish Food” (Wiley, $40). “In many cultures, honey, which comes ready-made from nature and does not spoil, symbolizes immortality and truth. This was the reason many ancient people embalmed or buried the great leaders with honey.
“Honey is the only food widely used by humans that is manufactured by animals. It takes up to 2 million flowers (or 556 bees) to make one pound of honey, and each beehive produces between 60 and 100 pounds of honey a year. Thus honeybees can only thrive in areas with plenty of blossoms. More than a third of the fruits and vegetables eaten by humans depend on bees for pollination. By the beginning of the 21st century, apiculturists in Israel produced more than 3500 tons of honey a year from 90,000 hives.”
Israel is known as the “land of milk and honey,“ a reference not to bee honey, but to date honey, which was produced in ancient times most commonly by boiling dried dates into sweet syrups, but other sweet fruits such as grapes, pomegranates and figs were used as well.
The carrot, which became popular in the West during medieval times, is another popular item on the Rosh Hashana table, both for its sweetness as well as its symbolism: Its Yiddish name “mehren” means increase or multiply, and when sliced it resembles gold coins. While tsimmes was the traditional Rosh Hashana carrot dish among Ashkenazim in previous times, this carrot salad from “Honey & Co. At Home: Middle Eastern Recipes From our Kitchen” by award-winning chefs Sarit Packer and Itamar Srulovich packs all the symbolism into a more modern vehicle. The couple moved from Israel to London in 2004 and in 2012 launched a 20-seat restaurant called “Honey & Co.,” which took the Best Newcomer award from The Guardian’s Observer Food Monthly, recreating the intoxicating flavors of their former home. Two more eateries followed. While their previous cookbooks focus on their restaurant fare, “Honey & Co. at Home” centers on the food they prepare for each other and their friends and family in their own home kitchen. “Life is complex, but cooking is easy,” they write, “and something good is guaranteed to happen if you just follow the recipe. Every home, every life, has its anchors and rituals, its own way to come together, its own recipes for happiness. In this book we offer the recipes that make up our home, our lives: from the things we rustle up at the end of a busy day to the grand feasts we spend hours preparing for special occasions.”

While London-based restaurateurs Packer and Srulovich prefer lamb’s lettuce, purslane or rocket for this salad, if unavailable, you may substitute with baby spinach. The pistachio “cream” refers to the creaminess of this pareve dish.

Yield: 6–8 portions as a side or 4–6 as a starter
For the pistachio cream
3/4 cup (3½ ounces) shelled unroasted pistachios

Pinch salt
For the salad

8 carrots – mixed variety would be lovely, if possible

1 orange, cut into thin wedges with skin on

While Goldman prefers using a 9-inch angel food cake pan (without removable bottom), according to epicurious.com, you can also make it in a 10-inch tube or bundt cake pan, a 9-by-13-inch sheet pan, or three 8-by-4 1/2-inch loaf pans. See their website for instructions.

Note: If you prefer not to use whiskey, replace it with orange juice or coffee.

Jlife Food Editor Judy Bart Kancigor is the author of “Cooking Jewish” (Workman) and “The Perfect Passover Cookbook” (an e-book short from Workman), a columnist and feature writer for the Orange County Register and other publications and can be found on the web at
www.cookingjewish.com.