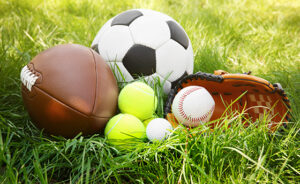 Sport and religion in America go together as naturally as motherhood and apple pie. Schools such as Notre Dame and Brigham Young, with large populations of religious students, field excellent teams in a variety of sports. When we learn that a certain outstanding athlete is also a religious person, our reaction is usually: of course, yes, that makes a lot of sense. Why? Because the religious way of life seems to be a natural fit with the athletic life, sharing as they do such common principles as commitment, self-discipline, and a positive attitude. “Religious” in America in general, though, and in American professional sport almost exclusively refers to Christianity. The fit between high-level participation in sport and Christianity’s older sibling is, I’m afraid, not a good one.
Despite the fact that American Jews savor each and every professional Jewish athlete who in any way acknowledges their Judaism (such as by not playing on Yom Kippur), there have hardly been any religious Jews in the entire history of American professional sport. In Israel, one would be excused for hoping that things would be different. Israel is, after all, a Jewish state, and surely in a Jewish state it should be possible to be a religious Jew and a professional athlete. The good news is that it is possible. The bad news is that sports culture in Israel makes it incredibly difficult.
Many of the founders of the State of Israel held Judaism as partly responsible for the perceived limitations of the “old” Jew, which included a tendency to eschew physical labor, the outdoors, and sport. For them, religion and sport most definitely did not go hand in hand. Not surprisingly, therefore, Israelis sports associations and clubs have a long tradition of utilizing Saturday as the week’s key sport’s day (whereas Friday, the first day of the Israeli weekend, could also be used). As a result, religious Jews in Israel are woefully underrepresented in the elite corridors of Israeli sport.
From a Jewish legal perspective, there is technically no Sabbath violation in the playing of almost all sports; the violation comes in the automotive travel to and from practices and games on Shabbat. From a less technical perspective, playing professional sport might not violate any one of the 39 codified activities that are prohibited on the Sabbath, but it certainly does seem to violate the fourth commandment: “Remember the Sabbath day to keep it holy.”
Some religious Jews are not prepared to be flexible with the definition of “work” and so relatively early on in their sporting career, they rule out Sabbath sports play—and almost always this means deciding against high-level participation in their sport. Religious Jews who wish to continue playing their sport at an elite level usually rely on the technical definition of work. These athletes agree to play on Shabbat as long as they are able to walk to and from practices and games. This inconveniences both the player and the team, but if the player is good enough, the team will be flexible.
In certain sports, however, participation in and of itself violates the Sabbath—e.g., modern fencing, where “touches” are registered electronically. I am happy to say that a recent ruling by an Israeli court upheld a petition by a young Sabbath-observing fencer, who argued that staging a national fencing competition on the Sabbath was discriminatory against him. Such a victory for religious Judaism and sport, however, is rare.
As a religious Jew who believes in the benefits of sport, I can only look on with envy at religious Christian elite athletes in America. G-d seems to be on their side

TEDDY WEINBERGER is director of development for a consulting company called Meaningful. He made aliyah with his family in 1997 from miami, where he was an assitant professor of religous studies. Teddy and his wife, sarah jane ross, have five children.

Living a Life that Matters