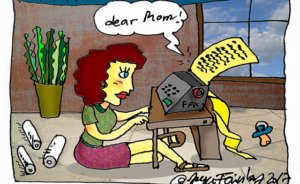 MANY YEARS AGO, browsing the shelves of an obscure, counter-culture bookstore in midtown New York, I purchased a t-shirt that would ultimately morph into a life-mantra. It read, “So Many Books, So Little Time.” I frequented this shop with hopes of meeting long-haired, pretentiously arty men who practiced reasonable standards of bodily hygiene. Being Jewish was optional.

Instead of meeting a mangy intellectual, however, I chanced upon a short-haired, religiously observant, first-generation Afghan-Israeli who, lost in Manhattan,  stumbled into the bookstore to use the pay phone.  Fast forward to lunch, some dates, marriage, six children, aliyah to Israel and, a subsequent divorce. Short on details perhaps but, for the purpose of this essay, nothing has been omitted.

This summer marks 22 years since I stepped off of the plane and made Israel my home. There was no Nefesh B’Nefesh in those days and an animal called the Internet was still hatching. Finding schools that reflected our hashkafah – outlook – was a hit-or-miss exercise and we failed in that regard several times over.  Vacillating between two synagogues, I spent many Sabbath afternoons blinking back tears because I could not understand the posted ads announcing upcoming aerobics classes or food-and-clothing drives for the needy. There was no Google translate for the times a child might hand me note from  the school nurse and, consequently, I’d painstakingly pour over a ratty Hebrew-English dictionary for hours just to discover that my daughter had head lice.

Twenty-plus years ago, I tackled grocery shopping by requesting tooth-towels instead of toothpaste and asking where they kept containers of tomato wars, when, in fact, I needed tomato sauce.  I was charged thousands of shekels that I hadn’t the linguistic skills to challenge when I took a badly-bleeding child to the hospital emergency room instead of the HMO-assigned crisis-care center. Driving the roads in the Galilee in the years before GPS once meant arriving at the barbed-wired Syrian border because I’d couldn’t understand the Hebrew on the exit for the Blueberry Picking Farm. Ignorance based on illiteracy was deemed indefensible both then and now.

Twenty two years ago we gently unpacked a fax machine that would offer the highest level of technological communication between my new home and the life I’d left behind. Exhausting roll-after-roll of thermal paper, I’d send my mother and father detailed accounts of what the children had eaten for breakfast, upbeat lies about how many friends we’d made, delicately taped articles from the Jerusalem post written by witty pundits and heartfelt inquiries about family and friends.  Only after I’d pressed a rubbery green button marked ‘Send’ would I fall face-down onto the bed in tears.

The fifty-sixth charter flight from Nefesh B’Nefesh arrived this week and every news outlet covered the human drama in technicolor splendor.  My Facebook wall was flooded with videos that recorded emotional departures and arrivals and I had a hard time channeling my feelings. So much hope.  So much pride.  How could one remain unmoved in the face of such life-altering images? Still, I experienced a twinge of jealousy. Like a weathered veteran of an almost-forgotten war, I ached for someone to film my story and passionately document the isolation/determination that formed my immigration narrative.

Clairvoyants don’t make aliyah. How could they?  The journey is rife with battles and bruising. But at the end of the day, unforeseen outcomes – both bitter and sweet – all retain clear markings of having been Heaven-sent.
New York native Andrea Simantov has lived in Jerusalem since 1995. She is a contributing write to Jlife magazine.