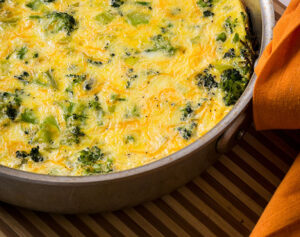 We’ve heard it before: Eat breakfast like a king, lunch like a prince, and supper like a pauper. But on Passover, which begins at sundown on Wednesday, April 8, with bread and flour forbidden for eight days, you’ve got to get creative.

“Breakfast is the most important meal of the day,” writes Paula Shoyer, author of “The New Passover Menu” (Sterling Epicure, $27.95), “but on Passover, some would rather just sleep through it. No toast, no bagels, no decent cereal can add up to a grumpy family.”
Not to worry. Shoyer has devised some tempting breakfast options, including Frittata with Broccoli and Leeks, Gluten-Free Waffles or Pancakes, Fruit and Nut Granola, and Crumb Cake Muffins. “I have always viewed the holiday’s dietary restrictions as challenges that can be overcome,” she asserts, “if you focus on the ingredients that you can use.”

With Leah Koenig’s Passover Cheese Blintzes from her latest book “The Jewish Cookbook” (Phaidon, $49.95) no one will miss cereal for breakfast. “Blintzes, crepe-thin pancakes stuffed with sweet or savory fillings, rolled into tidy parcels, and then pan-fried until golden, are an Eastern European delicacy,” she writes. “Immigrants from that region brought blintzes with them to America, where they quickly caught on. Blintzes filled with everything from kasha to sauerkraut to potato remain popular at Jewish delicatessens and diners.”

“The Jewish Cookbook” boasts over 400 Jewish recipes from all over the world and celebrates the diversity and scope of Jewish food, a constantly changing cuisine, she says, a product of the many Jewish cultures around the globe. “I am regularly asked, ‘How do you define Jewish food?’” she writes. “My answer is always the same: That depends entirely on whom you ask.

“Jews have lived and cooked pretty much everywhere in the world, maybe barring Antarctica,” she said in an interview with Phaidon. “So really the inspiration behind the book was to try to capture how Jews eat today across the world and capture a little bit of the history of how Jews used to eat….Today as ever, Jewish food is constantly evolving as Jewish people continue to relocate, as imported ingredients become increasingly available, and as our modern world and social media continue to build bridges between geographically disparate communities.”

This evolution of Jewish cooking is speeding up, she notes. “You’re also seeing Middle Eastern and Ashkenazi or Sephardic foods on the same table, which you’d have never seen 50 years ago. If you were Hungarian you had Hungarian Jewish food; if you were Moroccan you had Moroccan Jewish food; and so on. In Israel this was happening earlier, because you had a lot more intermarried families, so you would see more cultural blending on the tables there. But in terms of it happening in America and elsewhere, it’s a new thing. And it’s fun to open up the table in that way.”

Koenig also tries to clear up some common misconceptions. “One of the things that people get wrong about Jewish cooking is that it’s static and that it’s been the same since time immemorial—the way your grandma did it is the way everyone else’s grandma did it. They hold up Jewish cuisine as this very traditional thing, but the evolution of Jewish cuisine has been part of it since the very beginning. In essence it’s just a snapshot of this moment in time, and it won’t be the same in thirty years’ time.”

For the observant, the vanilla and confectioners’ sugar in the blintzes recipe are problematic for Passover. The following guide addresses those concerns:

NOTE: Baking ingredients for Passover
Vanilla: Pure vanilla extract, made from grain alcohol, is not considered kosher for Passover. Here you have several choices: Kosher-for-Passover vanilla, which is not an extract, but rather artificial vanilla flavoring.

Vanilla sugar, a common ingredient in Europe but not as well known here, which comes in little packets and is sugar that has been super-infused with the vanilla bean. Substitute 1 packet for each 1½ teaspoons vanilla extract; the small amount of sugar in it will not change your recipe.

Vanilla sugar you make yourself: About 2 weeks before Passover, split 1 vanilla bean in half lengthwise and crosswise and bury the pieces in 2 cups sugar. Seal tightly and store it in a cool, dark place. Shake it occasionally. Replace the sugar as you use it. It will keep until next Pesach.

Frittata with Broccoli and Leeks
Serves 4–6
Serve this frittata for breakfast, lunch, or even as a light dinner.
3 tablespoons extra virgin olive oil