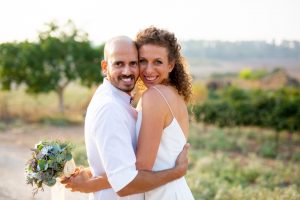 It wasn’t easy getting Ruthie married—and not just because her Daddy didn’t think that anyone was good enough for her. We were on pins and needles right up until the wedding, fearing that one of us would be told to quarantine after having inadvertently gotten too close to a person with the virus. Thankfully, this did not happen: I’m extremely happy to say that on Thursday night September 10, at the Kadma Winery in Kfar Uriah, Ruthie wed Nofar Shay in the presence of their closest family and friends.
When Ruthie and Nofar got engaged in May (they were then 29 and 30, respectively), the corona virus seemed to be receding. They settled on a wedding hall in Tel Aviv and made plans for 250 guests. But then Israel was hit by a second wave of infection, and at the beginning of July the government restricted wedding guests to 50 people. As the summer progressed, with little headway in fighting the virus, it became clear that the wedding venue would need to be changed and the guest list severely pared down.
Ruthie and Nofar, not knowing exactly how many people would be allowed to attend a wedding come September, designed a 3-point grading system for their friends, distinguishing between must-have “besties” and ordinary good friends. Ruthie joked that in meeting friends in the weeks before the wedding, she would say to them: “I hope you’re on time because if you’re late I might have to downgrade you.”
The Kadma Winery, located halfway between Tel Aviv and Jerusalem, nicely accommodated the wedding’s 58 guests (including 8 children).  Because Israel was still quarantining visitors from the U.S., none of our extended family attended. Given the limited number of guests, Nofar’s side also restricted themselves to their immediate family, thus avoiding the tricky business of choosing between uncles, aunts and cousins.
Besides the corona virus, Ruthie’s wedding was novel in an additional way: Ruthie and Nofar saw no need for a rabbi to preside over their wedding.  As a secular couple, they wanted their wedding to fully speak to them, and they were against bringing in a total stranger just for the sake of tradition. They asked Chen Golan, a civics teacher and friend of Nofar, to marry them, and Chen and his wife Efrat (he is secular and she is religious) met with Nofar and Ruth to help them design the ceremony.  I spoke with Chen before the wedding, and he said: “There are a lot of couples who are estranged from what religion represents; Efrat and I were attentive to Nofar and Ruth, and I believe that we have come up with a ceremony with which they can connect.”
I have to say that I was concerned going into the wedding. Would the ceremony feel meaningful? Would it feel Jewish? As it turned out, what with Chen connecting the upcoming Rosh Hashanah to the marriage’s beginning, with quotations from the Song of Songs, and with such traditional elements as the “Seven Blessings” and the breaking of the glass, it was perfectly clear that this was a Jewish wedding. And you know what? The non-traditional elements, such as the bride and groom each reading a love letter to the other, and the replacement of “I forget thee, O Jerusalem, let my right hand forget her cunning” with “may we have the wisdom, if something is broken, to turn it into a source of growth and creativity,” significantly added to the poignancy and meaningfulness of the marriage ceremony.
Remarkably, ritual had once again worked its magic: Two separate individuals had come under the huppa, but after the marriage ritual the two became a family. Everyone present (and hopefully those watching on Zoom) were moved to feel that Ruthie and Nofar, as is traditionally expressed, had established “a faithful home in Israel.” Mazal Tov!

TEDDY WEINBERGER is Director of Development for a consulting company called Meaningful. He made aliyah with his family in 1997 from miami, where he was an assistant professor of religious studies. Teddy and his wife, sarah jane ross, have five children.