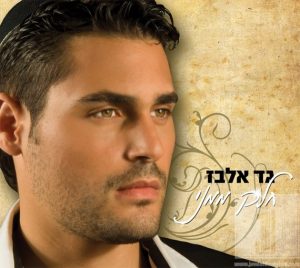 Gad Elbaz is a household name among the Orthodox Jewish population. Many know him from his wonderful, uplifting and inspirational songs that are played throughout various communities worldwide. The oldest of eight children (Elbaz has seven sisters), he started performing at age four in 1986. He grew up in Nes Ziona and moved to the United States only a few years ago, yet American Jews know very well who he is.
So, how did Elbaz become so well known? He started singing at age four with his famous father named Benny Elbaz. The name of their album together is called “Gadi, Aba Otcha Ani Ohev,” which means “Father I love you.” Since then, they have been playing music together. His father was a big celebrity in Israel during the 70’s, 80‘s and 90’s up until he became religious. As Elbaz puts it: “Music is our life!”
Currently, Elbaz is working on multiple projects. His most recent album is called “Light in the End of the Tunnel.” He is currently working on a unity album which will include worldwide singers as well as a Hebrew album. In addition, he has a wine line which is produced by Shiloh Winery, a Judaica line with David Roytman, and a seasoning company for various BBQ flavors. The main reason he is working on this particular line is because as he puts it: “I got divorced recently and needed to teach myself how to cook properly for the sake of my children.” He has three kids: Benjamin, Shir and Noya and wants to be the best dad he can be for them.
When asked what Elbaz would tell his 13-year-old self, he replied: “I would have told him that his career will be impressive and big. Be strong and always be humble.” He knows how to balance success and family.
Elbaz said that his dream is to be the face of the Jewish people in Israel and all over the world by “spreading unity, peace and spirituality.”  He is producing his new album, “It’s all about Love,” along with Brody Perez who has worked with other well-known singers including Christina Aguilera, Marc Anthony and Julio Iglesias.
All in all, Elbaz is a well-rounded, humble, and decent human being. He is down to earth and understands what is truly important in life. We can all learn a thing or two from this amazing guy!

Rachel Stern is a contributing writer to JLife Magazine.