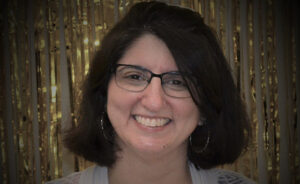 IN THIS WRITER’S opinion, Rabbi Zari is the right Rabbi for Temple Sholom at the right time. Temple Sholom of Ontario is over 60 years old. Our previous Rabbi moved to France with his wife and unborn child. Before he left, he suggested that we interview a former classmate from Ziegler School. You could say it was “b’shert.”

Were you raised in a religious household?   Both of my parents were raised orthodox, but it was a little restrictive for them. We moved down to Florida and I grew up in a Reform Temple with a very wonderful Rabbi, Rabbi Singer, whom I loved. We celebrated all the holidays, and we had people over for Shabbat. I was active in the religious school and the youth movement. Religion was a big part of my life growing up, a big part of my identity.

What are some early memories you have regarding Judaism?   When I was eight, my parents had taken our entire family on a temple sponsored trip to Israel. That was the first time in my life I remember really praying.

During the summer between my junior and senior years of high school, I returned to Israel to attend the Alexander Muss High School in Israel program. During my time there, I realized that Israel was as much of a home to me as America, and I knew I wanted to return there often. My hometown Rabbi, Rabbi Singer from Temple Beth El in Florida instilled my early love of Judaism.

After high school, what did you do?   I studied at the University of Miami on an academic scholarship and received funding for a year abroad. I (had) decided on Computer Science (and Engineering as a major) because math came easy to me…When applying to the study abroad program, my advisor counseled me to go to the Technion. The classes at Hebrew University had a more spiritual focus. Most of the classes would be about scripture, Jewish history and Jewish thought. I knew instantly that Hebrew University was the place I wanted to be.

What sort of spiritual transformation occured while you were in Israel?

I started the summer Ulpan at level Aleph. Three weeks into the Ulpan, I was able to read Hebrew with a semblance of comprehension. It was the first time I could read the Torah in Hebrew and comprehend what I was (reading). On that night, and every night since, I realize(d) I could take (the) oath to put (my) lot with the Jewish people.

My first meaningful exposure to Orthodox thought took place at Hebrew University.  As I learned more Halacha, I started to incorporate the rituals into my formerly completely secular daily life.

Were you comfortable working in a corporate, secular environment?  I made a complete transition form the unstructured life of a college student to the highly structured life of corporate America. (But) I faced another difficult transition: how to incorporate my newly found religious life into a mainstream Christian corporate environment. I observed Kashrus and observed Shabbat. I used the bulk of my vacation days, ten per year, to celebrate Jewish holidays. I packed my kosher lunch every day and declined to eat my own birthday cake.

How did you end up in New York?

I made a few job changes within the industry and then followed my old mentor to New York City. I discovered that I loved New York. Manhattan was the most vibrant Jewish community I’d been a part of since Jerusalem. I sang at B’nei Jesrum synagogue and volunteered at Makor. I made many close friends and had a new community with whom I could share Shabbat celebrations.

Were you happy working in New York?

I spent seven years working on Wall Street and was monetarily successful by any measure. I earned two promotions and was rewarded with large year end bonuses.  Instead of feeling the glow of recognition for a job well done, the promotions deflated me. I was zooming up a corporate ladder to a prestigious position that I did not desire. I knew I could not do it for another thirty years.

What did you do after leaving Wall Street?

I applied for and secured a job at New York University as an adjunct professor. I loved teaching and was hired as a consultant by many of my adult students. Eventually, my consulting work overwhelmed me. I left NYU and signed two major accounts. I headed (a) fulfillment center, and I bought (an) entire company….

What caused the transition in your life from corporate to Rabbinical?  During my teaching career at NYU, I was fortunate to have a long summer vacation.  In 2003, I took a three week summer course at Machon Pardes.  I loved it, and returned in 2006 for another three week course.  Studying Judaism as an adult was a different experience for me.  The framework with which I viewed the world had matured, and that enriched my understanding of the materials.  After attending Pardes and having conversations with Rabbi Fred Klein, I came to a realization. Going to Rabbinical school moves me towards a life I would value and love: studying Judaica, teaching, and counseling people through life changing events. I knew that I did not overly value monetary rewards, that I wanted my work to have a service component. Being a Rabbi called to me…

What do you see for the future at Temple Sholom?   I’d like to work with (the) congregation. I’d like to create special bonds within (the) community, to counsel members through life cycle events. It would be an honor to spearhead a child’s Jewish education, and watch them become active Jewish adults. Because of my background, I… excel at helping secular American Jews come closer to tradition, to educate adults and help them work traditions into their daily lives.

What would you like readers to know about Temple Sholom?  That we are traditional, but in a warm and open way. “Better living through Torah.” I hope to grow with the community. The Temple is small; hopefully we’ll grow together, with our Jewish reach, our Jewish knowledge, and Jewish lives. Hopefully we will enrich each other, and we can create a community where people’s lives are enhanced by meaning, purpose and tradition.

What is the best piece of advice you were given?  Rabbi Laura Geller said that it is important to have Hoosh Humor (sense of humor) once I start working in the pulpit, and that has been really important in my first few weeks (at Temple Sholom).

Alan Brown is the vice-president of Temple Sholom of Ontario.