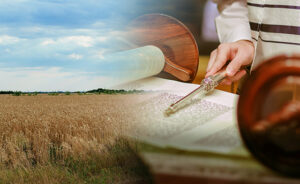 According to the Torah (Lev. 23:15), we are obligated to count the days from Passover to Shavuot. This period is known as The Omer. An omer is a unit of measure. On the second day of Passover, in the days of the Temple, an omer of barley was cut down and brought to the Temple as an offering. This grain offering was referred to as the Omer, and that’s why we refer to it as the Counting of the Omer.

The counting is intended to remind us of the link between Passover, which commemorates the Exodus, and Shavuot, which commemorates the giving of the Torah. It reminds us that the redemption from slavery was not complete until we received the Torah. The journey from Egypt to Sinai was not only biblical, but spiritual as well. As the Israelites hiked through the desert, they also had to find their way through the wilderness of their souls, preparing themselves not only to be given the Torah, but to accept the Torah.

Historically, this period is a time of partial mourning, during which weddings, parties, and dinners with dancing are not conducted, in memory of a plague that killed thousands of the students of Rabbi Akiva. These days also represent the time it took the Israelites to prepare themselves to receive the Torah. Lag BaOmer (literally the 33rd day of the Omer) was the day on which the plague ceased, and thus became a day on which the mourning rituals are abandoned and are replaced with great joy.

The Kabbalists also invite us to experience a spiritual journey during this time. As explained on the Chabad website, “There are seven basic emotions that make up the spectrum of human experience. They assert that, at the root of all forms of enslavement, is a distortion of these emotions. Each of the seven weeks between Passover and Shavuot is dedicated to examining and refining one of them. And within each week, the seven days allows us to delve even more deeply into each of those emotions and how they affect our lives.”

Upon conclusion of the 49 days, we arrive at the 50th day and the gift of the Torah. These seven weeks enable us to “traverse and refine every emotional corner of our psyche, so we are ready to receive the gift of Torah… and we receive the gift of true freedom—the ability to transcend our human limitations and touch the divine.”
Sources: www.jewfaq.org/holidayb.htm, www.aish.com/h/o/.