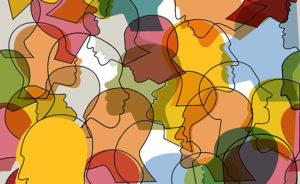 MY WIFE’S GRANDPARENTS were Jewish immigrants from Russia. I come from a family of black Catholics. My wife Rachael has been a Jewish professional for 15 years —she now works at Jewish non-profit, InterfaithFamily,—but she is not at all religious and neither is her family. Her Jewish identity is bound up in history, lore and food, not prayer and Torah study. She didn’t even become a bat mitzvah. By contrast, I’m baptized and confirmed, a godmother to my nephew and I keep a rosary in my backpack. My mother attended mass every day, my aunt and grandfather were both church deacons and a distant cousin was the mother superior of a convent.

I knew from the beginning that I could never ask Rachael to be anything other than Jewish, but I also knew that I could not be happy living a completely secular life. (And besides that, I wanted to better follow what she was saying when she talked about work.) So I went in search of a way to understand and experience Judaism so that together, Rachael and I could create an interfaith home.

Naturally, I started my journey at Yom Kippur.

Yom Kippur had always appealed to me as a holiday. As a kid, I was always drawn to the idea of the monastic life: the devotion, the sense of purpose, the self-discipline. Every year, I looked forward to Lent—the 40 day period of prayer, almsgiving and self-denial that precedes Easter—as an opportunity to pray every day, practice self-denial, say no to meat or sugar or alcohol (or, on one crazy year, all three) and learn. So, of course, I loved the idea of spending an entire day fasting and repenting.

But I didn’t want my Yom Kippur to be a hollow exercise, following the letter of the law rather than understanding the spirit of it. I wanted more than the fun of sitting down to a well-earned (and usually delicious) meal after a day of fasting. I was well-acquainted with Jewishness, but wanted Yom Kippur to be about Judaism. It was a distinction that had plagued me for years. I’ve always had close Jewish friends. But they were as secular as Rachael and the focus was always cultural, not religious. No prayers and no mention of God and Torah. When I met more observant Jews, there was a wall in place around the practice of the religion. I was an outsider, and I often felt as though no one thought I might want, or even should, know more.

In college, my friend David went to services at Hillel every week and did no work on Saturdays, but the only window he offered me into his Jewish practice was the night he recorded prayers onto my computer and set them as my alert tones. (For the next two years, any time I hit the wrong key, instead of a beep, I heard the Sh’ma.) But the prayers were in Hebrew and he never told me what they meant.

Through Rachael’s work, I often found myself at Jewish events and in Jewish spaces. Some went out of their way to be welcoming, but that often meant soft-pedaling the religion. Judaism became meditation or an abstraction or a vague “spiritual practice” without specific beliefs, practices, prayers or notions of God. Others assumed (incorrectly) I was going to convert, but never offered any insight into what I might be converting to, focusing instead on quips about kosher cooking. And still others simply ignored me.

That all changed one Yom Kippur. I convinced Rachael to go to services with me, at a shul in Eagle Rock called Temple Beth Israel. As soon as we walked in, I knew I had found what I was looking for. The service was completely foreign, literally—everyone was praying and singing in Hebrew, following a prayer book whose pages didn’t even turn in the right direction. But it was also strangely familiar, and not just because it was repetitive (though that helped). This was not a Catholic mass, but I could still recognize the patterns and rhythms of worship. We were all there for the same reason—to pray, repent and fast, together. I felt welcome, but not because the experience had been altered to appear less threatening. I felt included, even though (or because) no one asked if I was Jewish. And at the end of a long day, I enjoyed a delightful potluck break-fast. I had found my way into Judaism and Jewishness at last.

Since that fateful Yom Kippur, I’ve learned to read prayer book Hebrew (slowly), led multiple seders, danced on Simchat Torah, and started planning our son’s bar mitzvah in 2029. And I’ve managed to bring Rachael along for the ride. I still have that rosary in my bag, but we have managed to create a Jewish home. And Yom Kippur remains the star of my Jewish calendar year.

If you’re looking for help on your own journey, InterfaithFamily has resources to guide you. Visit interfaithfamily.com or call their LA office at 213-973-4072.