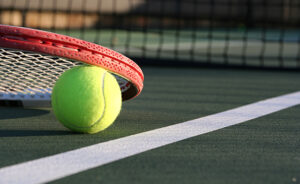 I RECENTLY DISCOVERED a deep connection between playing excellent tennis and traditional Jewish theology. It happened like this: When I was in the States recently, I bought a 12-pack case of Wilson tennis balls. Besides saving about $30 (off the Israeli cost), I received a free 2-CD program by sports psychologist and former professional tennis player Jeff Greenwald, called “Fearless Tennis.” Greenwald stresses that the score has nothing to do with actually playing tennis. Whether or not I win a point or a game or a set is a fact that is separate from my experience of how well I hit the ball or how much fun I am having. In fact, Greenwald argues persuasively that it is only when you go for your shots, when you play without being afraid of the score, that you not only have the most fun but you play your best tennis.

After thinking about it for a while, I realized that Fearless Tennis has a lot in common with hishtadlus.  This term, which can be translated as “trying”—in the sense of “putting in the effort”—is an important theological concept for many Jews. The idea is that my job in this world is to do the best I can, to concentrate on the work I have to do. It is not my job to worry about whether or not my work will succeed. G-d asks me to try.  I do not see the big picture.  I do not know why the advertising campaign that I worked on for two months was rejected; perhaps precisely because of the rejection I will be in a position to land an even bigger client. Like Fearless Tennis, hishtadlus allows a person to relax (Greenwald calls this “relaxed focus”), to concentrate on the task at hand, and to feel good about doing so.

The hishtadlus system has one big advantage over Fearless Tennis, and this has to do with the feeling of gratitude. Gratitude is a major component of Fearless Tennis; Greenwald says, for example: “show some gratitude . . . we’re very lucky to be playing this game.”  According to Greenwald, feeling grateful, besides feeling good, is an excellent way to maintain one’s relaxed focus in tennis. Gratitude is also important in hishtadlus: you are grateful to G-d for assuming ultimate control of things. This does not relieve you of responsibility for your own actions, but it does free you from having to worry about things that are beyond your control. The big difference is that in hishtadlus there’s an address for your feeling of gratitude, and it seems to me that this fact makes it a more powerful experience.

I have to admit that I personally have never been able to fully relax into a hishtadlus perspective. I get too worried and obsessed at things that are in reality beyond my control.  Then again, for most of my 42-year tennis career I would go to the line before a second serve and chant the following less-than-helpful mantra: “don’t double fault, don’t double fault, don’t double fault.” Nowadays, I have learned to perform a kind of ritual before every serve (I bounce the ball exactly three times, no more and no less), which helps focus my attention on what I am actually doing and away from fears of double-faulting. I also try to trust myself and to have more faith in my ability to hit the ball. And you never can tell—perhaps in some way this will help with my faith in G-d.

Teddy Weinberger, Ph.D., is Director of Development for a consulting company called Meaningful. He made aliyah with his family in 1997 from Miami, where he was an assistant professor of religious studies. Teddy and his wife, Sarah Jane Ross, have five children. ayrav Saar is based in Los Angeles.