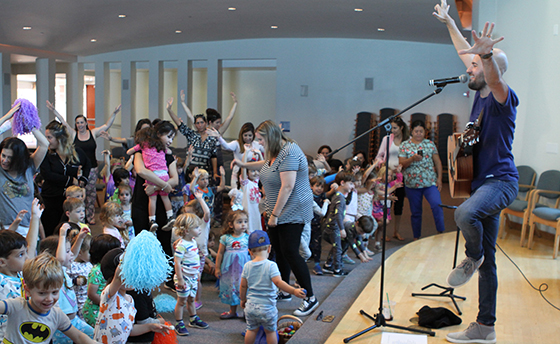 JASON MESCHES WILL be the featured entertainer at the PJ Library sponsored, Family Fest at the Park on Sunday April 29, from 2-4:30 p.m.. Monrovia’s Library Park is the venue for this first ever PJ Library event created for families with young children. In addition to face painters, balloon artists, crafts, food and a bounce house, families will be treated to a concert featuring the rollicking tunes of this New Jersey native who will take to the stage at 3:00 p.m..

Raised at Jewish summer camps, Jason has drawn on his own experiences as a child to bring a new sound and style to the world of accessible family music. Jason has been touring for the last four years with his first album “Oneg Time” and is a member of the nationally acclaimed children’s band “The Beat Buds.” His newest album, “The Nosh Pit,” is a continuation of his efforts to create fun, educational music for Jewish families. Jason is a proud alum of the URJ Camp Harlem. He was a 2016 nominee for the Covenant Award for his work in innovative Jewish education. He is the recipient of the Charles Alpert Award for Excellence & Devotion in Jewish Life and a NJ State Governor’s Award for his participation in creating Shabbat Hallelu at Temple Emanuel in Westfield, NJ. In 2013, he was commissioned by the LA Museum of the Holocaust to write an original piece as a gift to Marilyn Ziering. I recently chatted with Jason about his upcoming performance for Family Fest, and he was a total delight!

What can people expect from your concert?

People can expect a full body workout! My show is an interactive Jewish rock experience, with dancing and singing. My full motto is: sing. dance. schvitz.

What inspired you to want to make fun, educational music for families?

Growing up, my pathway to Judaism was through music and comedy. Our people have a long history of being great in both fields. As I became an adult, I saw a big open space in the field of relatable, funny, family friendly kid’s music. My passion for Judaism, mixed with a need in the Jewish community for modern, educational music made it a no-brainer for me. This is what I was meant to do.

What are you working on now?

I am currently working on my next album “The Schmooze Cruise” and finishing up my winter tour. I am also prepping for my summer tour and building some new programs for Wilshire Boulevard Temple’s Early Childhood Ed program, including new music curriculum, and interactive Shabbat experiences.

Where can people see you next?

You can always find out more at jasonmeschesmusic.com/tour … but quickly, I am in Miami in April, and in San Diego in May. I believe that music can change the world, and I firmly believe that it starts at a very young age. I am also excited to announce that my song “Tzedakah” was just selected to be on the 2018 PJ Library Compilation CD that will be sent out nationwide this December!

Jason attended Syracuse University and lives in Santa Monica, Ca. If you look hard enough you can find him on episodes of CBS’s “The Big Bang Theory” and “Two and a Half Men.”

Tanya Schwied is a contributing writer to Jlife Magazine.