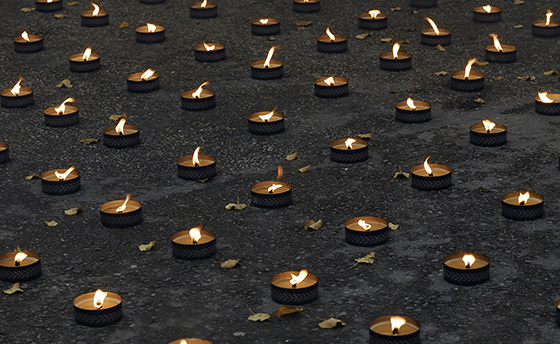 When Kim Banaji was growing up in Israel, Holocaust remembrance was something that was ingrained in the life of her community. So when Jewish Federation Executive Director Jason Moss told her he wanted to do a new sort of community Holocaust program for 2019, Banaji immediately thought of a powerful, emotional choice from her past. On January 26 and 27, the Jewish Federation of the Greater San Gabriel and Pomona Valleys will be leading a special vigil, called “Every Person has a Name,” on the steps of Pasadena City Hall, where the names of those who perished in the Shoah will be read aloud and remembered.

“The inspiration I personally had is from my high school days,” said Banaji on a recent phone call. At Banaji’s high school, everyone was required to take a trip to visit concentration camps in Europe during the 12th grade. It’s a trip that’s still stuck with Banaji to this day. “We had this really intense ceremony, for two hours, of reading names, and it was so powerful, because you really got to understand fully and deeply, who were the people that were murdered in Europe.”
When Banaji shared her high school experience with Jason Moss and suggested holding a similar ceremony here in California, Moss jumped at the opportunity. “I am looking forward to this event in many ways more than anything we’ve done, because I think it helps solidify that ideal of what the Jewish Federation is, and what it’s supposed to do,” said Moss. “We strive to bring the community together in order for people to feel a part of, and connected to their Judaism and Jewish community.”
Both Moss and Banaji believe that holding a vigil and reading the names of those lost in the Holocaust is an opportunity for people to come together in a new way. The evening will start with a commemoration ceremony featuring speakers, as well as performances by Kol HaEmek and the Jewish Youth Orchestra. After the ceremony, names will be read aloud for 24 hours. Community members will be able to sign up to read names during half-hour blocks. Moss hopes to have Holocaust survivors as the readers during the first block.
Prominent members of the community, including Pasadena Mayor Terry Torneck and State Senator Anthony Portantino will be taking part in the vigil. In addition, Congressman Adam Schiff, Congresswoman Judy Chu, LA County Supervisor Kathryn Berger and State Assemblymember Chris Holden were also invited to attend. Moss says that there are many ways for people to be involved. “If they don’t feel comfortable reading, they can just sit and listen. They can attend the commemoration ceremony.” Just being present and showing support is part of the power of the event.
Banaji believes the vigil can bring the community closer together. There is no agenda for her beyond that. “I’m not trying to educate anybody, I just want us all to have this one ceremony together to remember together.”
For Moss, the event is a chance to remember the Holocaust with survivors who won’t be here a decade from now. “With every passing day, survivors are dying, and with them go their stories… my concern is that the memories will be dying as well,” said Moss. “And the fear that I have… is that when there are no more survivors… that the growth of anti-semitism, those that say the Holocaust didn’t happen – the Holocaust deniers – those strong voices that could counteract the denials and the deniers, will be gone.”
That is why Moss is happy to take the risk of wading into new territory with the vigil. “Having never done this in this community, it’s a big task, but at the same time I think it can be a very powerful thing that people are going to want to participate in,” said Moss. “How incredible would it be to make this a community tradition and really stage something grand!”

JONATHAN MASENG IS a Contributing writer for jlife magazine.