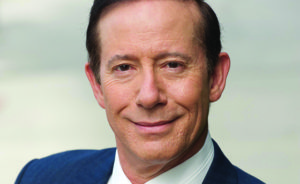 Jlife recently had the opportunity to interview Adam Milstein an Israeli real estate investor and philanthropist. Milstein is a managing partner with Hager Pacific Properties, which specializes in acquiring, rehabilitating and repositioning industrial, retail, office and multi-family properties. He and his wife Gila have also established the Gila and Adam Milstein Family Foundation which strives to strengthen Jewish Americans’ relationships with Israel.

Good afternoon Mr. Milstein. Thank you for speaking with me. You’re welcome. What would you like to talk about first?

You served in the Israeli army during the Yom Kippur War in 1973. Did this experience shape you at all, influence your career path, or play a role in what you dedicate your time and resources to today? I was in the Israeli army serving my mandatory duty between 1971 and 1974. The Yom Kippur War happened in October of 1973. I was stationed in the Sinai Peninsula and that’s where I was when the war broke out. During the war, I served in the Sinai and crossed the Suez Canal, but I was just a kid. I was twenty-one years old. In Israel everyone has to serve in the army so it wasn’t really a time when I was thinking about my future. Did it make me an advocate? Not at that time. Growing up in Israel definitely educated me to be a freedom fighter and independent. First of all, serving in the army at eighteen years old, being in a life-or-death situation, being in war, definitely made me a leader. It made me responsible for my actions. It taught me that I can fight for myself, and what I think is right. So the experience of growing up in Israel and going to the army made me a fighter, somebody that is not afraid to fight. Someone who stands up for what’s right, that’s for sure. But it didn’t make me a philanthropist at that point. *chuckles*

No of course, not. *chuckles* So how did you end up in the United States? I finished the army in 1974 and got married the same year. I went to the Technion, which is similar to MIT in Boston, and graduated in 1978. In 1981, I came with my wife and two small daughters to Los Angeles to pursue my higher education. I attended USC and the plan was to go back to Israel after I finished, but after I graduated, I decided to stay longer. A few months became a few years. A few years became many years and now, thirty-five years later, I’m still here. And I have three daughters; one of them married and now I have three grandkids. I don’t see myself going back to Israel. I see myself today as an American citizen of Israeli descent, or what we define as “Israeli-American.”

Did you feel that in the 1980s, while you were at USC, that there was, even then, a widespread anti-Israel sentiment among the student body? No, it really started in the early 2000s after the Second Intifada in Israel. The Oslo Agreement was signed in 1996 and there was a sense of peace in the Middle-East, but this sense of peace was met with a wave of terrorism in Israel. The Second Intifada started affecting the campuses here in 2002, 2003 and 2004. That’s when we started seeing anti-Zionism and anti-Semitism become serious issues on college campuses.

When did you start to devote more of your time and resources to philanthropy? About twenty years ago, when I was starting to get to a level of financial independence. This was when I knew I was financially capable of retiring and I could provide for my family and living expenses. When I got to that point, I felt that it was not enough just to make more money. I also wanted to give back to the community and be an advocate for Israel. I began to look for ways that I can use my business experience, connections, and money to make a positive impact and leave behind an honorable legacy.

My wife Gila and I established the Gila and Adam Milstein Family Foundation on certain principles. The mission statement of the foundation is to strengthen the Jewish people and make sure that the Jewish population here has a strong relationship with Israel. We practice something that we call “active philanthropy,” which means we provide our time and connections in addition to money. We work to create synergies between organizations, and create force multipliers between organizations. For example, we’ve been bringing students to AIPAC for eleven years. And we don’t recruit them directly but we ask the organizations that we affiliate with to recruit them. By doing so, we’re connecting to AIPAC many other pro-Israel organizations, and we’re ensuring follow-up with the students when they come back.

What other programs do you support that promote engagement with the U.S. Jewish community? All of our programs are inspired by a belief in a “LifePath.” This philosophy is basically that we don’t just do one program or activity and then that’s it. We want to really try to impact the growth of a Jewish kid from the age of two. We have different programs from the age of two to eight, and eight to twelve, and make sure there is continuation.And with Sifriyat Pijama B’America, we provide children’s books to families all over America. In this way we not only engage the child, but we’re also communicating with the parents.

Perry Fein is a contributing editor to Jlife magazine.

Learning from a Difficult Past

The Prince of Kosher Gospel