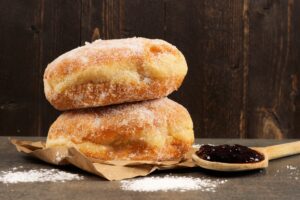 It has been eight years since we celebrated Thanksgivukkah, when Thanksgiving and the first day of Hanukkah converged, a rare mash-up that won’t occur again for 70,000 more years.
Jewish cooks got creative with recipes such as Stuffing-Stuffed Brisket, Green Bean Casserole with Schmaltz and Gribenes, Sweet Potato Noodle Kugel and Pumpkin Challah.
This year we come close, as the first night of Hanukkah is Sunday, November 28, just three days after Thanksgiving.
With sweet potato fries on the menu in practically every restaurant today, it’s not a giant leap to envision sweet potato latkes. I found just the ticket in “The Jewish Cookbook” (Phaedon, $36.49) by Leah Koenig, freelance food writer and author of six cookbooks.
“In America, home cooks have taken many creative liberties with traditional Hanukkah potato latkes, swapping out the usual russet (baking) potatoes for shredded zucchini, beets, carrots, parsnips, and, perhaps most commonly, sweet potatoes,” Koenig writes. “This modern take on the latke pairs the bright orange tubers with a fragrant mix of curry powder, ginger, cumin, and a touch of brown sugar. The resulting fritters taste comfortingly familiar and excitingly novel at the same time.”
One word of caution. Sweet potatoes, botanically unrelated to the potato as well as to true yams, are often mislabeled as “yams.” The mix-up began with the African slaves, who began calling the American sweet potato “yams” because of their resemblance to the yams they remembered back home.
The true yam is more like the potato and not nearly as sweet as the sweet potato. Its texture upon cooking is also more like that of the potato, rather than the custardy texture of the sweet potato. If it’s sweet you’re going for in your “yam” dish, no matter whether the sign in the supermarket says “yams” or “sweet potatoes,” they’re both technically sweet potatoes.
“The Jewish Cookbook” is an ambitious compendium of international Jewish cuisine with more than 400 recipes for holidays and every day from the Middle East to the Americas, Europe, Asia, and Africa as well as contemporary interpretations by renowned chefs, including Yotam Ottolenghi, Michael Solomonov, and Alex Raij.
For everything you always wanted to know about latkes, join Koenig virtually on November 22 at 3:30 pm PST when she will appear with cookbook author Jake Cohen, Sophie Rand, and Jeffrey Yoskowitz, (moderated by Gabriella Gershenson) for a lively panel discussion entitled “All About Latkes” broadcast from the Streicker Center in New York. To register go to https://streicker.nyc/current-season/latkes.
While for Ashkenazim, latkes are the iconic Hanukkah food, for Sephardim, it’s sufganiyot (jelly donuts). While in Israel every bakery carries them in every flavor imaginable, sufganiyot are not that ubiquitous here, but you don’t have to be Sephardic to enjoy them, and you don’t have to be a professional baker to make them. The sufganiyot recipe featured here from “Sephardic Baking from Nona and More Favorites” by food writer and blogger Linda Sendowski is lusciously addictive and supremely doable.
“I have been cooking and baking my whole life,” Linda told me. “When my children were young, I began teaching cooking classes as fundraisers for their school PTA’s. Since then, I have been writing about food on my blog (the globaljewishkitchen.com), for The Washington Post and for Jewish papers.”
Sendowski has loving memories of her idyllic childhood in Seattle where her Sephardic family had emigrated from the Isle of Rhodes.
“My great-great-grandparents had a bakery and baked for the sailors on the fishing boats,” she recalled. “My grandparents came to the United States around 1910, my father’s parents from Rhodes, Greece, and my mother’s from Turkey.
My mother was always baking. On Friday after school I would get home and there were hot borekas (savory pastries) and bunuelos (cookies) for Shabbat and little rolls called panezikos. And there weren’t any machines. Everything was done by hand. I still have the special crockery bowl she used. She always sprinkled the bread with sesame seeds. Sephardic people love sesame seeds.”

¼ cup sunflower oil, plus 6 quarts for deep fryer (or less, depending on your pan)

1. Place flour and salt in medium bowl, stir, and set aside. Place warm water, yeast, and 1 teaspoon sugar in small bowl and stir. Let stand until foamy, about 5 minutes. Add warm milk, the 1/3 cup sugar, and oil to yeast mixture. Crack egg and egg yolk into another small bowl and whisk with vanilla.
2. Add liquids to flour and stir to combine. Work dough with your hands to incorporate flour. Knead until smooth and elastic. Place kneaded dough in large oiled bowl, loosely cover with plastic wrap, and then cover with tea towel. Place bowl in warm, draft-free place. Let rise about 1½ to 2 hours or until at least doubled in size.
3.  When dough has risen, place on floured work surface. Roll dough into a 3/4-inch-thick square. Using a 2-inch floured biscuit cutter, cut rounds from dough and place on floured surface to rise a second time, about 40 minutes.
4. Heat oil to 365°F on candy thermometer. It should be at least 3 inches deep. If you do not use a deep fryer, use a very deep heavy-duty saucepan. When oil is at right temperature, gently place pillows of dough into hot oil. Do not crowd pan. Fry until deep golden and, using tongs, carefully turn them. Fry second side until deep golden. Remove sufganiyot from oil and drain on sheet pan lined with paper towels. When cool enough to touch, inject them with jam or cream, filling them through bottom or side. If you don’t have a bottle with a needle nose or an injector, gently open a hole in the side of the sufganiyot with a serrated grapefruit spoon and carefully spoon in jam. Sprinkle with powdered sugar or cinnamon sugar. Eat right away or as soon as possible as these are best eaten warm.

Sour cream and applesauce, for serving

Stocking up for the Holidays