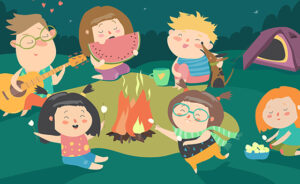 Once upon a time in Orange County, California, the people were quarantined due to a virus. Forced to stay home and socially distance from anyone not living with them caused the families to create imaginative adventures. Here’s just one…

After packing a small overnight bag with comfortable clothes, a swimsuit, cosmetics and medication, the children (including adult children who were willing) met at the living room campground. They began their first session of camp with a song circle, singing together, among other favorite camp songs, Oseh Shalom. Those who had instruments played during the song circle. Others grabbed pots and pans, wooden spoons and noisemakers and participated together. They took photos of their song circle and then went off to pitch their tents. Some had brought small tents with them, others used their imagination and built tents out of sheets, comforters and tablecloths. All the tents were personalized. Then the fun began.

Everyone changed into swimsuits and played. Some had water balloon fights in their yards and gardens, others played in the shower or bathtub. Lots of fun was had by all. Of course, food was a highlight of the camp. Everyone came together to make pancakes for breakfast, chocolate chip cookies for dessert and snacks, and they even enjoyed a make-your-own pasta bar for dinner.

After dinner, the children gathered around the campfire (fireplace) where everyone sang camp songs, told stories, and even made s’mores. This was followed by a quick trip to the bathroom to brush teeth and off to bed. Of course, the night was punctuated by chats, midnight feasts, and silly tricks. The next morning everyone wrote a postcard to someone who mattered but wasn’t with them at camp, and another day began.
A great camping adventure was had by all… albeit with a little imagination.

SUE PENN is a contributing writer to Jlife Magazine.