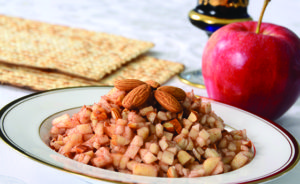 YES! AND WOMEN are featured in both! It was Miriam who watched over her brother who led his people out of slavery and who enjoined the women to sing and celebrate the crossing of the sea; if it hadn’t been for Vashti, maybe the first feminist, who refused to parade naked before King Achasverous and was exiled, there wouldn’t have been the opportunity for the beauty queen Esther (nee Hadassah) to step in as queen. (Alas, not many little girls wish to dress up as Vashti.) Nevertheless, Esther finds courage to save her people and becomes a heroine!

So what are the other connections? On Passover we become the players in the biblical drama of our rescue and redemption from Egypt. Purim too is grand theater; we wear costumes, spin groggers to obliterate the name of Haman and act out the Megillah.

When we compare the two holidays we can see that there are several points that stand out. Both have miracles in them, but there are differences between the two miracles.

The miracles of Passover culminate with splitting the Sea of Reeds and drowning the Egyptians clearly revealing G-d’s total control of life and active participation and intervention in the world. These miracles, obvious to all, shattered the laws of nature.

In contrast, the miracle of Purim was not obvious and not brought about by supernatural intervention. Nature was not changed; rather change was brought about through the actions of people. Yet, although the miracle of Passover was greater, and there is certainly a mitzvah to be happy on Passover, it does not compare to the ecstatic joy and happiness that is felt on Purim.

Like the Exodus from Egypt, we knew that we were in a state of danger, but unlike the Exodus, it was the Jews who took the initiative and participated in our own redemption. All of the Jews in Persia fasted to change the evil decree and it worked!  During Passover on the other hand, we were not in charge of our fate. We were characters in God’s drama.

So while we eat the traditional food (especially charoses) and spell out the story of our redemption on Passover, during Purim we make plays, spend the day in never-ending singing and dancing, give our friends and relatives baskets of goodies and sweets, dress in costumes, crack jokes, get tipsy and give charity.

The day’s obligatory services of Purim include giving charity to at least two poor people and giving at least one friend two food items that are ready to be eaten. This is called Shalach Manos (though to be grammatically correct it should be called Mishlo’ach Manos). And of course – eating lots of Hamantashen! Isn’t it always about food?
Florence L. Dann, a fifth year rabbinical student at the Academy for Jewish Religion in LA, has been a contributing writer to Jlife since 2004.