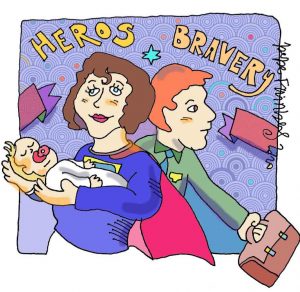 My friend Adinah ominously stated during Shabbat dinner that life is like a roll of toilet paper. “The closer one gets to the end, the faster it goes.”  We chuckled over this pronouncement while wolfing down challah and matzo balls. Chuckling is not, however, laughter. We were still in isolation and the yuk-yuk train had left the station.
Having exhausted questions about unemployment benefits and when we might get back to the gym, we began to discuss the Jewish Agency’s prediction of 100,000 new immigrants to Israel this coming year, triple the number of olim who entered in 2019.
“Where will they live?” “What work will they do?” “Do they know how difficult it is?” We experienced surges of both excitement and trepidation, respectively recalling our own Zionist stories. Adinah had been here the longest; coming after the Six Day War, as a mere child who enrolled in Hebrew University. I came 25 years ago with my Israeli first husband and six children. My husband Ronney, arrived with his children and late-wife a mere 24 years ago. All of us had survived. We had struggled. So much drama. No time to think. Adjustments, enlistments, bureaucracy, wars, death, divorce, homesickness, alienation, language barriers. What had we done? What prices had we paid?
Often when visiting America, I’d hear that I was considered brave. “I couldn’t do that.” “I’m too timid.” “I’ve never been an adventurous person.” Other declarations included “I can’t leave elderly parents.” “Israelis are rude and pushy; I couldn’t live there.” “My skills/degree/education/profession isn’t recognized/transferable.” “I can’t afford to live there.” “I’m not religious; Israel is no place for me.”
And I’d respond, bullet point-by-bullet point. I’d exhaust myself like a one-woman aliyah committee. Occasionally, however, I’d hide my inner  resentment: “No one helped me! I couldn’t speak the language! I got divorced in a scary and foreign court! I had neither skills nor access to assistance!” But to what end, this outpouring of sadness and disappointment? None.
And so it behooves the question, What Is Bravery? Zooming with an old acquaintance recently who is contemplating aliyah at an advanced age, he fears that he is not made of the Right Stuff.
And thus, I say, asking is brave! It is brave to order something new from the menu and let your hair grow. However, having one’s hair cut may denote adventure and asking someone to join you under the chuppah is, for some, remarkably daring. Divorce might reflect hope and not defeat. There are times when remaining with a partner indicates fearlessness. Heroes stay up late editing resumes for loved ones and rocking children with fevers. They are single and married, complex and weathered, speak several languages and are mono-lingual. Heroes earn their livings while marching to different drummers. Other lofty individuals defer dreams while tediously performing unrewarding jobs in order to make rent.
Bravery is not a matter of “is” or “is not.” Not reliant upon level of religiosity or bank balance, bravery is kindness in a gossipy, vapid, celebrity-centric world. It is saying “No” to vulgarity and yes to giving. It is an inner-voice that asks, “Why not?” and answers, “Let’s.” It takes courage to utter, “Tell me about it” when we’ve been conditioned to believe “I don’t know” denotes weakness.
We are not weak or brave, stubborn or relaxed. We are what we invest into this ebbing sojourn. And to my aliyah-considering friend, channeling my inner Bon Jovi, I’d suggest that it’s your life. No one lives forever and it’s better to live while one’s alive.

New york native Andrea Simantov has lived in Jerusalem since 1995. She writes for several publications, appears regularly on Israel National Radio and owns an image consulting firm for women.