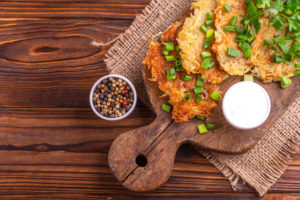 The Jewish Federation of the San Gabriel and Pomona Valleys is looking to its past for inspiration as it prepares to launch its newest offering. This April, a brand-new Jewish Food Festival will be coming to the streets of Monrovia. It’s a bold move intended to further the Jewish Federation’s mission, and one that has Federation executive director Jason Moss excited for the future.
“Jewish Federation’s mission is to strengthen and enhance Jewish life, and an event like this that convenes a community, that brings a community out and connects people, is right in line with what we try to do,” said Moss on a recent phone call.
According to Moss, the thinking went that “if we do a food festival, we can attract not just the Jewish community, but the non-Jewish community as well, because people enjoy food festivals.” In that sense, the event will become a huge outreach opportunity for the Jewish community. “Our hope is to attract people to celebrate the Jewish community and Jewish culture through our food.”
The Festival was the brainchild of Jewish Federation Vice President Julie Miller, who’s served on the Federation’s board for nearly half a decade. “We used to have a festival in the park… and it was just something to bring the community together. Our territory is fairly spread out, so I was looking for something to mimic that bringing the whole community together with a cultural event, and of course, who doesn’t like food?” Miller said.
The subject of the festival was a natural choice for Miller. “I’m a nutritionist, so food is central to every day of my life as I counsel people on nutrition,” said Miller. “I like cooking for my family, doing dinner parties, having the holidays at my house, because I do think that it brings people together, no matter what culture you are.”
Miller is excited by the possibilities. People have already been signing up for the festival. One participant will be making brisket sandwiches and cole slaw, another will be doing a demonstration on how to bake soft matzah, and a third will be teaching about the process of pickle-making.

“There really is something for everybody,” said Miller, who wanted to make sure the festival would represent a wide array of Jewish culture. In addition to the food, there will also be two stages where cooking demonstrations will take place, and groups like Kol HaEmek and the Jewish Youth Orchestra will perform. Miller hopes that by bringing arts into the festival, it will broaden people’s cultural experience. There will even be an area for visual artists to display their work.

The festival will also be incredibly family-friendly. Both Miller and Moss wanted to make sure that kids would be entertained during the festival, so that their parents could come out and enjoy. There are plans to have face painting booths, balloon-making, a bounce house, therapy dogs, and even a visit from the Monrovia Fire Department, who will be bringing a fire truck over for an hour for kids to see.

The festival will take place in Monrovia’s Library Park from 11 AM to 4 PM on Sunday, April 7th. Moss has been working closely with the city of Monrovia to make sure things run smoothly and to ensure that everything is safe and secure. “We’re working with the Monrovia Police Department to develop a security plan,” said Moss, who says the city has been incredibly cooperative and supportive throughout the planning process.

People have also been stepping up to sponsor the festival. Sponsors already include the Foothill Gold Line Extension, Ellen’s Silkscreening, Laemmle Theatres, and LA County Supervisor Kathryn Barger. Moss hopes to attract even more sponsors before the festival and would welcome local businesses who want to step up and help.

Community response has already been very enthusiastic, according to Moss. “When we talk about it… people are like ‘wow, that sounds like a lot of fun.’ They’re looking forward to it, they’re marking their calendars.” It’s that level of enthusiasm that has Moss hoping that over 1,000 people will come out for the festival in April.

“We’ve tried adding programs that allow people to connect their Judaism to things they enjoy doing,” said Moss. It’s part of a broader Federation strategy to make Judaism more engaging for community members. “Our hope is that this grows, that it becomes an every other year thing, and that we can… build upon it each time.”

Monrovia has a strong tradition of holding festivals, which makes it the perfect site for the new Jewish Food Festival. The city is known for its popular “Monrovia Days” festival, as well as its many holiday events and fairs. Moss hopes that because of Monrovia’s unique culture, locals from the area will come out to support the Federation’s new venture.

Many different groups have already signed on to participate, including local temples. There will also be booths for various Jewish camps and community organizations. A large portion of the proceeds will go towards supporting Jewish life in the area, so attendees can feel good about spending their money as they enjoy themselves.

Miller is just happy to see her idea coming to life, and she hopes others will come out to support it and the community. “I think food is very welcoming, and can remind somebody of childhood experiences. It can take you back to event almost immediately with a taste or smell, so I think food is pretty powerful in so many ways.

Standing on the shoulders