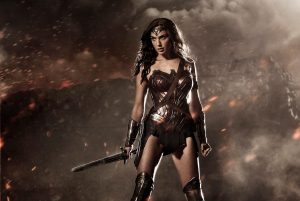 Up until recently, I assumed that the State of Israel would have by now significantly impacted American stereotypes of Jews. Surely something must have shifted in the 50 years since I grew up? Surely after decades of Jewish fighter-jet pilots and tank gunners, the American Jewish man could not be stereotyped as the weak nebbish that I grew up on? Surely Wonder Woman Gal Gadot has exorcised the whining, unattractive, Jewish American Princess?
As you have probably surmised from the title to this column, I was wrong.  The quotation is taken from “Fleishman is in Trouble” by Taffy Brodesser-Akner, a woman who grew up Orthodox, left Orthodoxy as a young adult, and who now leads a fairly traditional Jewish life thanks to her gentile-born husband who decided to take his conversion seriously. Like Brodesser-Akner herself, the protagonist grew up in the ‘80s and early ‘90s. “Fat, Jewish, clumsy, short,” we learn, is how Toby Fleishman thought of himself in high school.  Toby is a brainy, nerdy, doctor with an emasculating Jewish mother, and his ex-wife is, in the words of the narrator, “a bitch.” Toby forces his two children to attend Friday night services with him; they don’t like going to synagogue, and the narrator adds: “no one does.” The fertility decisions of Toby’s sister, who is religious, are described in almost racist terms (she “breeds” children), and her traditional Jewish life is depicted as almost pathological.
Brodesser-Akner was, of course, under no obligation to present a more nuanced depiction of Jews and Judaism in her novel. Still, most authors write out of their own experience, and indeed in some respects Brodesser-Akner does so here; for example, the narrator is a woman who wrote for a men’s magazine and Brodesser-Akner wrote celebrity profiles for GQ. I thus find myself asking: Why did an author like Brodesser-Akner, who finds a lot in Judaic religious tradition to be personally meaningful, not write more from her own experience of Jews and Judaism? Answer: Americans would not have responded to such a book, and it would not have become what it did: a bestseller! As something of an expert on celebrities, Brodesser-Akner knows what Americans like and want. And so she writes about Jews the way America likes to read about Jews.
To see a case in point from a truly great American writer, one has to go no further than Elizabeth Strout’s most recent novel, “Olive, Again.” The last chapter has 86-year-old Olive living in a senior citizens community. Retired lawyer Bernie Green is a fellow resident; his wife is in the community’s Alzheimer’s unit, and “whenever Olive saw him he had tears in his eyes, and sometimes they were just coming straight down his face.” An astonished Olive asks her son over the phone: “What was that all about?” Christopher tells Olive that “the guy was Jewish, and Jewish men weren’t ashamed to cry.”  Never mind that this particular Jewish man has lived most of his life in a small town in Maine sans Jews and that his existence is totally divorced from Jews and Jewish practice. He is a Jew and may be safely subsumed within a stereotype of the Jewish man—but sometimes even “positive” stereotypes are demeaning.
I am sad that old stereotypes still and apparently will always prevail in America. True, if you are brought up with a proud Jewish identity you know that “fat, Jewish, clumsy, short” is a stereotype. But you still have to deal with it. Slim Jews, dexterous Jews, tall Jews are all departures from the stereotype, but they don’t eliminate the stereotype. Jewish stereotypes are apparently hard-wired into American culture and are inescapable. My children grew up in Israel without reference to these pernicious stereotypes. My children grew up without experiencing “Jewish” as negative.