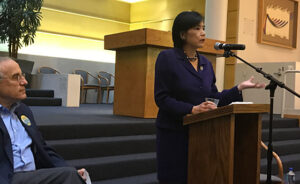 CONGRESSWOMAN JUDY CHU, 27th District, could barely get through a sentence or two without a round of roaring applause from the packed sanctuary.
The veteran congresswoman, who has been a champion of equal rights, an advocate for issues that affect immigrants, a proponent of social policies that support minorities and the poor, a supporter of ensuring access to health care and the ACA, spoke candidly about her mission at a town hall meeting at Pasadena Jewish Temple and Center on April 20.

Among the issues she addressed were Trump’s executive order on immigration as well as his stance on healthcare, Russia and Israel.

“We need to make sure this country remains the country we know,” Chu said. “Let’s make sure this is an America that truly stands for justice and equality.”

“Instead of healing divisions, Trump has decided to worsen them,” Chu said. “His statements and actions have been so shocking that I had to act.”

Chu’s town hall event consisted of a short speech followed by questions from the audience.

The town hall program was the first public event hosted by the PJTC Social Justice Committee at Pasadena Jewish Temple and Center. The committee formed shortly after Trump’s executive order on immigration, which hit a nerve with many congregants.

Chairman Rabbi Marvin Gross said the committee decided to invite Chu to speak at their first event to shed some light on what is going on in Washington D.C. “People in the synagogue were very upset and outraged, and they wanted to do something as Jews to raise our voices in opposition,” Gross said. “We thought this would be a great way to start.”

And, the congregation found out that they weren’t the only ones who felt that way. Organizers had to add more chairs to the sanctuary to accommodate the number of people who attended the Thursday night event. More than half the audience were not temple member and most were not Jewish.

Cary Belling, 63, of Pasadena, said he came to show his support for the congresswoman and to hear how Chu and other Democrats in Congress are opposing the Trump agenda. Belling is not a temple member.
“The election of Trump has sent a shock through my life,” Belling said. “It’s extremely valuable and extremely important that we get out and support each other. I applaud the committee for taking a real active stance on these issues.”

For many, the event seemed something of a group therapy session, with many of the questions from the audience echoing a similar question: What can we do to protect our priorities and values under the current administration?

Questions addressed issues from foreign policy to health care to the environment to the border wall.

Representatives from Planned Parenthood set up a booth outside the event and passed out free pink T-shirts. Security guards were posted at the entrances to the sanctuary.
In response to a question about speculation that Trump would try to encourage the Supreme Court to overturn Roe v. Wade, the decision that legalized abortion, Chu said activism is key.
“We have to keep up the pressure,” she said. “This has been so important to so many women across the nation. He has to know that if he does that, he and his party will pay at the polls.”
On all issues raised at the forum, Chu encouraged everyone to stay active in politics and to make their voices heard. She added that she is heartened by the activism she has seen across Southern California and the country already.

“What is encouraging is the proliferation of interfaith and community events around this nation,” Chu said. “We must continue to send a strong message that we will stand together.”
Chu also noted that the 2018 congressional elections could make a significant impact as well.
“I think it’s going to take a change at the ballot box,” she said.
Gross said he was pleased with the attendance at his group’s inaugural event, and promised more similar events in the future.

“I am so thrilled with the turnout, her presentation and the overall response from the community,” Gross said. “To have a full sanctuary on a Thursday night was amazing. I don’t know in my lifetime if I have seen something like this.”

At the end of the event, organizers presented Chu with a lawn sign that featured quotes that read, “Immigrants and refugees welcome.” And, “We must not stand idly by,” (Leviticus).
For more information on future events by the PJTC Social Justice Committee, visit www.pjtcsocialjustice.wordpress.com.

Lauren Gold is a contributing writer to Jlife.