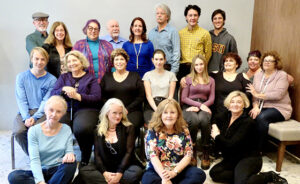 The JFed Players’ Spring musical, A Little Night Music, is their most ambitious project to date. Directed by Cantor Judy Sofer, this musical – music and lyrics by Stephen Sondheim; book by Hugh Wheeler—is not to be missed. Witty, engaging and romantic, Stephen Sondheim’s masterful A Little Night Music is based on a 1955 film written and directed by Ingmar Bergman, Smiles of a Summer Night. Of the many musicals for which Sondheim wrote both music and lyrics, this multiple Tony award winning musical is one of two that are classified as commercial successes; it was the only musical on Broadway making a profit in 1973. A true feat, as the early 1970’s was the dawn of a new era in musical theatre, a time when many musicals focused on social injustice—by contrast, A Little Night Music is reminiscent of a Viennese operetta, set in waltz time. In 1990, it was added to the repertory of the New York City Opera.

A Little Bit About Sondheim
One of the most important figures in 20th century musical theatre, Sondheim was born into a Jewish family in New York City in 1930. An only child, he grew up on the Upper West Side until his parents divorced, at which time he and his mother moved to a farm near Doylestown, Pennsylvania. He was ten years old. For the most part, Sondheim was an isolated and emotionally neglected child. However, he did form a friendship with James Hammerstein, son of Oscar Hammerstein, who was a neighbor. Over time, Oscar Hammerstein became Sondheim’s teacher, mentor, inspiration and surrogate father.

Sondheim traces his interest in musical theatre to Very Warm for May, a Broadway show he saw when he was nine. His first big break came when Leonard Bernstein needed a lyricist for West Side Story. Although Sondheim really wanted to write music as well as lyrics, Hammerstein encouraged him to take this opportunity to write the lyrics first, as a foot in the door, telling him the music will come later. Sondheim did just that, followed by writing the lyrics for Gypsy in 1959. The first musical for which Sondheim wrote both the music and lyrics was A Funny Thing Happened on the Way to the Forum. Although the show won several Tony awards, he did not receive a nomination. His other well-known works as composer and lyricist are Company (1970), Follies (1971), A Little Night Music (1973), Sweeney Todd: The Demon Barber of Fleet Street (1979), Sunday in the Park with George (1984), and Into the Woods (1987).

At 90 years old, Sondheim is still writing, creating innovative musicals and acting as a mentor to aspiring composers and lyricists. Around 2008, Sondheim approached Lin Manuel-Miranda to help him translate West Side Story into Spanish; Miranda then asked him to give notes on Miranda’s project, The Hamilton Mixtape, which became Hamilton.

And a Little Bit about the Play
Set in 1900 Sweden, A Little Night Music explores the tangled web of affairs centered around actress Desirée Armfeldt, and the two men who love her: a lawyer, Fredrik Egerman and a Count, Carl-Magnus Malcolm. When Desirée performs in Fredrik’s town, their passion rekindles, inciting a flurry of jealousy and suspicion between Desirée; Fredrik; Fredrick’s very young wife, Anne; Desirée’s current lover, the Count; and the Count’s wife, Charlotte. Both men—as well as their jealous wives—join Desirée and her family for a weekend in the country at Desirée’s mother’s estate. With everyone in one place, infinite possibilities of new romances and second chances bring endless surprises.
A Little Night Music highlights Sondheim’s genius for both music and lyrics, which is exemplified in the song, “A Weekend in the Country,” at the end of Act I. Through “amusing and delightfully droll” lyrics, we experience the range of emotion from each principal character upon receipt of an invitation for a weekend in a country manse. The words are witty and expertly crafted. Sondheim is also noted for complex polyphony—as exemplified by the “Quintet in Night Music”—simultaneously combining a number of parts, each forming an individual melody and harmonizing with each other.

In this musical, Sondheim also employs several interesting innovations. First, it is composed almost exclusively in triple time, mirroring the numerous love triangles in the story. This theme is underscored during the overture and “Night Waltz,” when the characters first take to the stage in a waltz, changing partners throughout the piece, trying to find their “match”—exactly what they do throughout the entire story, until they finally find the right partner—the triplet settling into duplet timing in places. The second ingenious device Sondheim employs is the use of a Quintet, five Socialites who interact with the audience. They open the show and reappear periodically, much like a Greek Chorus, as Harold Prince says, “. . . showing up as part of the action, representing the people in the show who aren’t wasting time . . . the play is about wasting time. It’s also about the masks people wear.”

“Send in the Clowns,” the show’s best-known and Sondheim’s most commercially successful song, was a late entry into the musical, orchestrated in one night during the pre-premier run in Boston, while the show was undergoing a massive rewriting. The role of Desiree was initially written for a non-singing actress, more or less. Glynis Johns, the original Desiree could sing, however, she had difficulty sustaining notes. To deal with that, Sondheim employed yet another innovation—he wrote the song with phrases ending in consonants, making for short cut-offs. The song is also written to be acted rather than sung, underscoring the regret that Desiree has for how her life has turned out and the unusual situation she is in at the point where she sings the song.

The JFed production of A Little Night Music opens on Saturday, June 20, 2020 at Portico’s Art Space in Pasadena, and runs through July 2. Tickets can be purchased online at www.jewishsgpv.org, or at the door. Group rates are available. Don’t miss this lovely and entertaining musical.

Lori McKenna is a contributing writer to Jlife magazine.

This Too Shall Pass