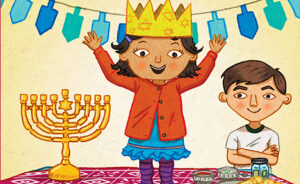 Author Pamela Ehrenberg’s charming new picture book called Queen of the Hanukkah Dosas celebrates siblings, diversity and the joyous role traditional food plays in different cultures, in this case Indian. With Hanukkah approaching as the story opens, an older brother narrator describes his younger sister Sadie’s penchant for climbing, even in the Indian supermarket. Fortunately, his version of the dreidel song succeeds in getting her to climb down. “I had a little dosa; I made it out of dal.” By page three readers learn the family is a blended one with an Indian mom and Caucasian dad. Rather than making latkes together, this family prepares dosas, a crispy pancake popular in South India that’s cooked in coconut oil. When everyone except a napping grandmother gets locked out as cousins arrive, Sadie’s climbing capability comes in handy. Colorful artwork complements this entertaining story and readers will easily smell the food cooking with each page turn. Recipes for dosas and the sambar served with it are also included.

Ronna Mandel is a a contributing writer to JLife. You can find her blog at goodreadswithronna.com.