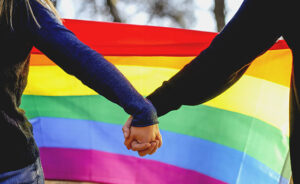 TRANS RABBIS AND other trans-identified Jewish scholars, as well as allies, are filling in the blanks of the Torah narrative. Breathing a new experience into Jewish sacred texts, these rabbis and scholars are creating a space for the gender fluid person. In fact, they maintain that such a space has always existed.

Linking the transgender identity and the journey of self discovery with the Torah and rabbinic literature, Rabbi Elliot Kukla states that it was within the Mishna that they first saw their transgender identity reflected. In Mishna Nazir 2:7 Rabbi Kukla was first introduced to the tumtum, a gender/sex variant person. The rabbi no longer felt homeless in their gender identity.

Similarly, Rabbi Ayelet Cohen draws a connection between the transgender experience and the Passover narrative in Exodus. She explains that each year during Passover, as Jews, we are called to personally identify with the Exodus story, and to see ourselves liberated from “Egypt” or mitzrayim, much as our ancestors were liberated. But then she notes that for transgender persons, their “Egypt” or mitzrayim—is their body.

The connection between Toraic narrative and transgender identity may seem quite novel to many. The term “trans Rabbi” certainly is. And both seem part of a worldwide social movement focused on LGBT visibility and issues. But is any of this authentically related to Judaism? In particular, is anything about the transgender identity connected to Jewish thought or rooted in Rabbinic Judaism, or rather, is it merely part of a trend in secular society?

Indeed, issues related to transgender identity, including legal, social and medical issues are ‘trending’ in the media. And some point to a greater visibility today of transgender persons as nothing more than a fad. In fact, some use a specific term—‘trans trend’— a term which acts to trivialize that visibility, and to deny trans-persons their human experience.

A simple Google search of the term ‘trans trend’ results in a myriad of hits. Many of the articles containing the term infer that being transgender isn’t an innate reality but rather, a product of mental illness, and that the number of persons identifying as transgender has increased due to a fad, not to greater awareness.

However, “facts” cited in these articles are anecdotal at best. For example, one author writes about her child’s school undergoing certain changes in order to accommodate a gender non-conforming student, but for her, (in a rejection of the fact that gender is a social construct that varies across cultures and over time), biological sex is the sole determiner of gender and so such changes illustrate a slippery slope of permissiveness that could influence susceptible children.

In a similar article, the writer paraphrases a local school psychologist, “He believes that most of the kids that are engaged in this ‘trans world’ are troubled kids…[but] some aren’t troubled at all. They are just being trendy and experimental.”

Comments equating transgender identity as a fad and not based in a healthy reality, foreclose an individual’s lived experience. But Jewish faith communities including Reform, Reconstructionist, Conservative and even Orthodox to some extent, seem to be moving towards acceptance of transgender persons, rather than rejection.

Additionally, in 2016 the Rabbinical Assembly of Conservative Judaism passed a resolution calling for transgender inclusion in conservative synagogues. For Orthodox communities it’s more complex, because of the strict adherence to Jewish law or halacha. Thus, among the Orthodox, an overarching consensus that LGBT identities conflict with the Torah. But even the Orthodox communities have taken steps to be somewhat accommodating towards LGBT persons. A recent My Jewish Learning article noted that “A number of Orthodox synagogues permit transgender Jews to sit in the gendered section of the synagogue of their choosing.”

In fact, a close examination of the Torah and classical Jewish texts may reveal support for this move toward acceptance.

The Israelites had a four-gender, non-binary system: the androgyne (or first human), female, male and tumtum, a person born with undeveloped or hidden genitalia—a term which may have acted as an umbrella identity that included the intersex/hermaphrodite.

The aylonit woman is also mentioned in the Talmud, a barren woman described as “man-like.” There were also two types of eunuchs discussed—the congenital eunuch and the human made eunuch.

In addition, Deuteronomy has a cross-dressing ban, a fact illustrating that a gender-bending phenomenon existed at the time.

Indeed, the existence alone of these categories points to the reality of diversity in the ancient Jewish world. These people lived and were part of society, no matter how Jewish law sought to address their existence.

More importantly, the discussion of gender variance in the sacred texts points to Judaism’s focus on inclusion of such diverse persons in sacred life, rather than full exclusion. Thus, certain Talmudic texts discuss marriage laws concerning the tumtum, eunuchs, intersex-person and the aylonit woman, all of whom were marrying.

Of course, not everything was idyllic for gender and sex diverse persons as their social statuses were categorized within a male-female binary. But diversity exists and the diverse are given a space in sacred text and thus, the contemporary acceptance of transgender and gender non-conforming persons through trans-affirming policies in certain Jewish sects is, in fact, rooted in Judaism.

Therefore, acceptance of gender diversity in contemporary Judaism reflects not a social trend, but rather, a continuation of the Jewish, religious pattern of complex intellectual thought and an acceptance of diversity.

E. Zazueta has her Master’s degree in religious studies. Her research focuses on gender identity, sexuality and religion.