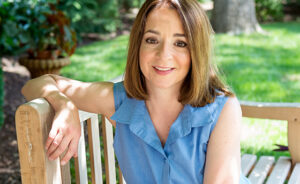 PAM JENOFF IS a busy woman—law professor, mother of three young children, former diplomat and lawyer, Holocaust expert. She’s also a prolific and highly regarded novelist. In the decade since The Kommandant’s Girl came out, Jenoff has published nine novels and several short stories. Her latest novel, The Orphan’s Tale (Mira Books, 2017) has been acclaimed equally by reviewers and readers, both Jewish and non-Jewish, and was on the New York Times Bestseller List for five weeks this year.

“I think it cuts across the divide,” she says. “It gratifies me to see how the themes have resonated with readers.”

Set in Vichy France and Germany during the height of the Nazi occupation, The Orphan’s Tale is the story of two women, Noa and Astrid, whose lives have been upended by the war. They both find refuge in the least likely hiding place, a traveling circus whose owner is sheltering Jews.

The book started with two stories Jenoff unearthed while doing research in the Yad Vashem online archive. The story of the Unknown Children, babies taken from their parents by the Nazis and sent to concentration camps, inspired the opening chapter in which Noa, a teenage girl, comes upon a train car filled with babies and escapes with one of them.

The other starting point was the story of a German circus owner who hid Jews as his troupe performed. He was honored as a Righteous Gentile in Israel in 1995, and one of the families he hid serves as a model for Astrid’s backstory.

However, Jenoff says, her characters are intentionally fictional rather than biographical; even those modeled on real people make different choices, with unexpected outcomes.

Jenoff says she was unsure at first whether her detailed individual portrayals were the right way to approach the Holocaust. “When Band of Brothers came out, I thought, who am I to write about people going to cafés and night operas?” But the juxtaposition of ordinary life continuing during wartime fascinated her as it has her readers.

“This novel is about sanctuary and the moral choices we make,” she explains. “I don’t believe in stereotypes, and I try to give each character an individualized response.”

Jenoff’s interest in the Holocaust and post-war years grew out of her early career.

“I grew up with the typical Jewish kid’s understanding of the Holocaust,” she says. “But then I went to Poland for two and a half years. I was living very close to where the war took place. It moved and changed everything.”

Following a master’s degree in history at Cambridge, she took a job at the Pentagon working on Army matters such as helping the families of Lockerbie disaster victims obtain their memorial at Arlington National Cemetery and observing recovery efforts at the Oklahoma City bomb site. Then she took the foreign service exam and the State Department sent her to Krakow, Poland. “I started out stamping visas and passports.”

But in the mid-1990s, Poland was emerging from decades of communism and there was a lot of unfinished Holocaust business, including restitution of Jewish property and the preservation of Auschwitz. “There were only eight Americans in the office, and the State Department gave me responsibility for that work. I became very close to several Holocaust survivors, and became interested in the gray areas of history, the nuances. I always think, what would I have done in this situation?”

When Jenoff returned to the US, she earned a law degree and went to work as a labor and employment attorney. Meanwhile, she says, “I had always wanted to write but never got started.” The events of 9/11 spurred her to action. “My first day at work was September 4, 2001. The 9/11 attacks were my epiphany: I realized I didn’t want to only be a lawyer. I had a deeper dream of being a novelist.”

Jenoff says she’s still inspired by the Holocaust because it’s such a rich area of history, especially with the repository of archives now available to scholars. “There’s still so much to learn.”

Pam Jenoff will be appearing Friday, November 17 at 10 a.m. for a breakfast book signing at the Altadena Town and Country Club. For details and to make reservations, go to www.jewishsgpv.org or call the Jewish Federation office at 626-445-0810.

Deborah Noble is a member of PJTC and serves on the Jewish Book Festival committee.